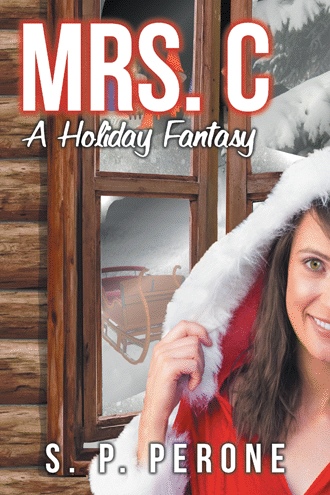 I couldn’t remember ever seeing so much white or feeling so very cold. Everything had happened quickly. At one moment, we had been seated in a booth at The Vista on Monterey Bay; the next moment, we were suspended mid-air above a sprawling, quaint village below a midnight-blue sky. Ancient street lamps and pinpoints of yellow light, escaping through tiny frosted window panes, flickered over waves of whiteness stretching to a starlit horizon. I gasped and shivered simultaneously; and the next instant I was garbed in a fur-trimmed scarlet coat. As the shadowy, snow-covered landscape came up to meet us, I looked at my companion … and gasped again. Now, Nick was garbed in a similar scarlet jacket with matching pants and shiny black boots. On his head was a fur-trimmed scarlet stocking cap. “Oh my God!” I cried. “You are Santa!” He laughed—a boisterous, long guffaw—just as we landed in a snow bank outside a huge red barn. “So I’ve been trying to tell you, my dear.” Trying out the tall leather boots that appeared on my feet, I took a couple steps in the deep snow, turning to face a suddenly-new character. “Are we really—” “At the North Pole? Not exactly, but close enough. This is home for me and my helpers … and, I hope, for you some day.” I caught his eye. “Nick … I mean … what in the world do I call you?” Another hearty laugh. “Everybody up here calls me ‘Santa.’ But don’t let that influence you.” “Alright, Santa … or Nick … or whatever … I’m beginning to get a little scared. This just can’t be real. You don’t really want me to marry you and live here … do you?” His answer was a big grin. “Alright,” I protested, “this has gone far enough. I have no intention of moving to this godforsaken iceberg to become the latest consort for some goddam immortal who’s going to watch me grow old and wither and die.” His white, thick eyebrows arched as if they might push through his cap. “Whoa! Language, Margo! I am a saint, you know.” He winked, but his eyes had turned dark, silently scolding me. “I’m sorry,” I said, instantly regretting the harshness of my words. “I don’t mean any disrespect, Nick. But, seriously, you need to take me back to California.” He took a few seconds to remove his heavy gloves and then turned to face me. His hands reached out to hold me gently by the shoulders, and he looked into my eyes. For a moment, those warm brown orbs filled me once again with a strange, soothing mellowness. “First of all, Margo,” he began sternly, “I asked you to be my wife not my mistress. Yes, there have been many. Did I love each and every one? Yes, I did. Did I grieve each loss? Look closely, and you can see grooves carved by the tears. Did I ask for this job? To outlive each of my spouses? Absolutely not!” The passion of his words seemed to leave him momentarily drained. But they had rendered me speechless. Finally, after a long silence, I asked, “Why … why do you do it?” “It’s my job,” he said flatly. “I mean, why do you take a wife, when you know.…” “That I will lose her?” I nodded. “Don’t you think I should have a companion?” he asked. “Well … yes, but … I mean, I can’t imagine choosing to get close to … and then … you know.…” “Can you imagine living alone for seventeen centuries?” That one got me. My silence prompted him to add, “But my needs are not the entire story, Margo. There’s much, much more.” “More? What else?” Nick winked and gently urged me toward the barn. “You’ll see,” he said.

When a computer matchmaking service connects her to “Nick,” a man with an astonishing secret agenda, Margo Sanchez is drawn into the most bizarre courtship of all time. Finding herself falling for Nick, she is stunned when he claims to be Santa Claus and wants to make Margo the next Mrs. C.

Disbelieving, Margo challenges Nick for proof. Abruptly, she is transported from her San Francisco home to Nick’s magical realm at the top of the world. There she encounters elves hiding ancient secrets and engages in bristling debates with her suitor, while surprisingly being drawn to him and his enchanted world.

Despite Nick’s gallant courtship, Margo turns him down and returns home. But shortly before Christmas, a calamity in Nick’s world summons her back. There she is alarmed to learn that the crisis threatens cataclysmic global devastation—and that only Margo might be able to stop it.

Before she can act, however, the previously untold secrets of Santa’s realm, its elves, and their true mission on earth must be revealed to her. These shocking realities impel her on an unprecedented odyssey—an epic round-the-world journey that provides a surprising climax to a most remarkable holiday romance.

Sam Perone is an award-winning writer and consultant who has published numerous technical articles, two textbooks, nine novels and a memoir about his life as a professor in the 1960s. Perone and his wife live in the Sierra foothills of Northern California. Visit his web site at www.samperone.com.