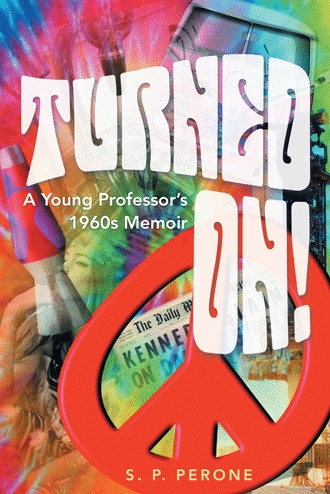 No decade before or since witnessed cultural, technical, and social changes as dramatic as the 1960s. Pop culture reflected a transition from the rigid 1950s to the permissive 1970s. The Vietnam War spawned student protests, draft card burning, and a hippie counter-culture.

Caught up in these turbulent times was author Sam Perone, a naïve young professor beginning his career at the tender age of twenty-three—young enough to run in student circles. Perone’s unlikely arrival in 1962 at a prestigious university—lacking credentials and experience—launched an erratic journey laced with angst, liberating diversions, exciting research, bitter conflicts, dismal failures, and exhilarating successes. In Turned On!, he shares his own life story against the backdrop of the times.

A collection of personal experiences that characterize that turbulent decade, this memoir tells about the time Perone got tipsy during his university job interview; the weeks he slept in chemistry labs; the explosions, floods, flashes, pranks, and jolts that marked his early research; the wild parties fueled by lab alcohol; his unexpected “love affair” in 1967 San Francisco; the sometimes serious, sometimes disturbing, and always laughable instances of faculty clashes; and finally his pivotal involvement in the minicomputer revolution.

Turned On! describes a personal journey toward self-realization in a world that was rapidly changing in fascinating ways. It captures the impact on campus life of historical events that defined the 1960s, but also provides insights to the inner workings of the academic world in that era and beyond.

Sam Perone has worked in academic and government arenas and as a consultant in the San Francisco Bay Area. He has published numerous technical articles, two textbooks, and seven novels. He and his wife live in the Sierra foothills of Northern California. Visit him online at www.samperone.com.