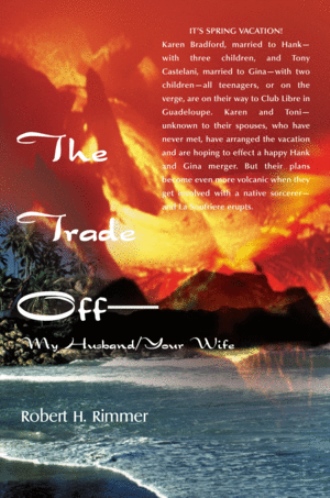 If you’ve ever had an affair, or are divorced, married again, or still faithful and monogamous, you may be completely shocked, or might approve—Karen Bradford’s proposal to her husband Hank. After eighteen years of marriage,and three children, she wants him to sign a marriage contract with a clause that from now on—he will agree to a Succedaneum Marriage. He doesn’t know and has never met Tony Castellani who is married to Gina, and has two kids—or that Tony and Karen are lovers. But a Succedaneum Agreement (check the word in your dictionary) would allow them to enjoy a second relationship—and stay married!

Guaranteed! You’ve never read a non-stop, detailed, explicit sex and loving story like this. It all takes place in Guadeloupe, on Spring vacation, where Karen hopes to mate her husband with Tony’s wife—and make her dream come true. But alas, taking their five children—one—Judy Bradford, sixteen, an another Marc Castellani, seventeen,along with them—conniving a foursome vacation, at free wheeling Club Libre, isn’t the right environment for their more puritanical spouses... On top of that Marc—who despises Catcher in the Rye, thinks he’s smarter than that phony, Holden Caulfield, ever was. He’s still a virgin, but he’s determined to mate with Judy. Before that happens—he, inadvertantly, discovers that his father is making out with her mother—at the same time Soufriere, the volcano is about to explode.

Bob Rimmer who has chartered bare boats, and sailed in most of the Caribbean Island—loves Guadeloupe best. Is this story based on fact ? Well, sort of—and it proves that the path he has carved in other stories—though the jungle of potential expanded monogamy, like corporarte marriage, in Proposition 31, and synergamy in Thursday, My Love, is filled with rumbling volcanos.