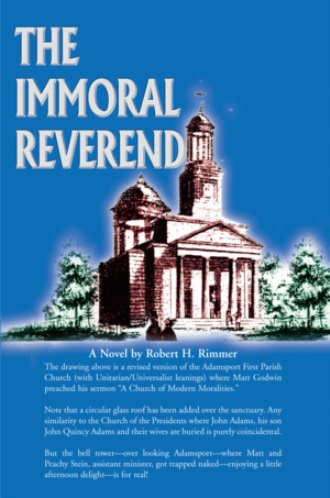 A CHURCH OF MODERN MORALITITES!

In the city of Adamsport, Massachusetts—very similar to Quincy, where Bob Rimmer has lived most of his life—Matt Godwin, with both an MBA and a Doctor of Divinity degree from Harvard—after fifteen years in the business world, is about to be elected president of a multi billion dollar conglomerate created by his father.

But defying both his wife and his father, Matt returns to the Unitarian/Universalist pulpit. He has a vision of a church that offers an entirely new approach to Christian morality. Inspired by the never ending mystery and wonder of procreation, life and death, his religion will preach the exaltation of the human body and mind—and human sexuality will have a joyous, laughing, sacramental quality.

Matt's religious humanism is portrayed amidst a background of obsession and adventure. Attempting to build a new style church. Matt's need for funds, leads him on a search for millions of dollars in gold bullion dumped by an American transport plane during World War II in the Himalayas, when we were at war with the Japanese. With the help of an Islamic, Arab oil billionaire he rebuilds and recreates a former Unitarian Universalist church and offers a sexual religious agenda that shocks the conservative Christian community.

Originally published in 1985—Bob Rimmer has elaborated the Church of Modern Moralities with a new, 21st century, franchised religion in his novel,