To Play Instead of Work 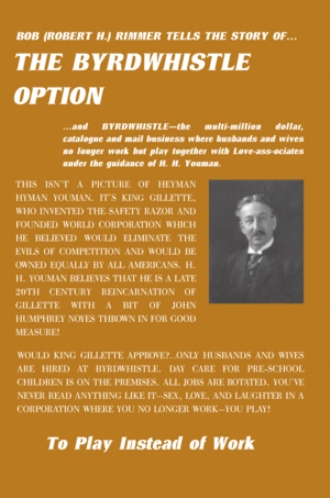 FASTEN YOUR SEAT BELTS! —for a dizzy ride—not into the future, but the here and now! Byrdwhistle is a highly profitable mail order company where only married couples are employed—with varying hours that makes it possible for one, or the other, to be home when the kids come home from school. Byrdwhistles do not work—they play together and with other spouse's permission can relax in company sponsored "love rooms."

You'll love Heyman Hyman Youman, the 62 year old maverick who created this utopia where jobs are rotated regularly—and no matter what job you do—husbands and wives, together, earn the median family income plus a spectacular share in the profit bonuses. All the new married employees have to do is pass an entrance exam—based on Abraham Maslow's Theory Z management philosophy and become a transcender.

But all hell breaks loose when Ralph Theimost, CEO of WIN Incorporated, a billion dollar conglomerate, and Ronald Coldaxe, his Director of Acquisitions, are determined to take over stock control of Byrdwhistle from the majority stock holder, Thornton Byrd now in his 70's—who sleeps with Youman's wife, occasionally. Even Coldaxe's wife, M'mm—becomes a pawn in the battle of wits as they try to make Byrdwhistle conform to old style economic reality.