Making of a God 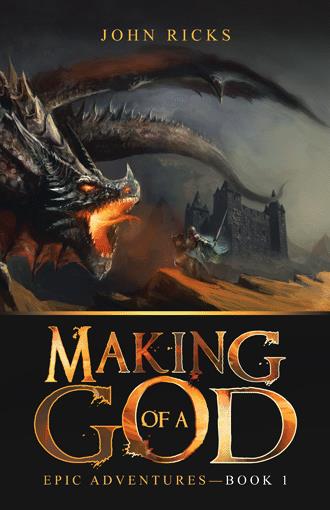 The Rouge said, “My Prince, the Men on Horseback and the two sorcerers are moving toward the Lancers.” “Anyone left with the poor stone giant?” “No, Highness.” “Think you can sneak down there and release him without being killed.” He smiled, took out a potion and disappeared. The lens was pressed into my hand and I heard him run in the direction of the giant. I stood up and ran down to my horse giving orders to prepare to fire and retreat. “Take out the magic users first. All bolts and arrows at the magic users.” Dedrick and Eric were following close on my heals – hoping that the archers realized I was talking about the enemy magic users and not them. When I reached the Knights the foot soldiers were already arriving with the lances and standing them up so the lancers could grab them without dismounting. I quickly changed orders. The enemy would not expect lancers as we just used them and they dropped their lances. “Knights mount and take up lances. Foot soldiers, hand lances to the Knights and then protect the Queen. Knights prepare to follow me. We are charging the enemy.” I pulled out a soldier and ordered, “Run and tell the Captain to join the fight on the hill.” All the Knights mounted. Dedrick and Eric moved to the back after boosting my abilities with increased strength and constitution. I lead the Knights on a charge up the hill. As we moved the archers fired and then ran down the hill. They saw us charging up and moved out of the way. As we reached the top I saw that the enemy horsemen were charging up to attack my archers. We had the high ground. Surprise, my heavy cavalry (Knights) slammed into the enemy and ran them down. Fire balls and lighting bolts slammed into the only magic user in the enemy ranks and I found myself face to face with a demon wielding a long sword made of some dark red metal. My horse clashed with his demon mount and my trained heavy war horse started attacking his evil creature. I parried his blade several times trying to find an opening but there was no opening. This demon was good. The demon was wearing me down and would win if this kept up. I had already sustained several cuts and they burned like fire. Something was wrong. He seemed to know my moves before I executed them. Then it hit me and I concentrated on making a strong left strike and did a right instead. My dwarven forged blade went right through and removed his unprotected head. He had been reading my thoughts. I looked around me and the battle was over. The Lancers had joined with the Knights and finished off the ones trying to escape. Clerics were healing our wounded and Knights were killing the wounded enemy. I hated having to take no prisoners but my hands were tied. I would have to beg the Gods for forgiveness latter. Right now I had too much to do. I checked my mount and he was in fine shape, just a few bites that would be healed easily. I walked the big gray to the top of the hill to check on Mother. She was doing as asked, helping tend the wounded. All three of the women were working on men and several maids were tending to horses. There’s one thing good about the women of Kayland. They may be pests at times, well – most of the time, but when it comes to work they are not afraid to get their hands dirty. Royalty included. Having four Clerics from Commeatus helped tremendously with healing, including myself, and were invaluable during the battle. I was beginning to appreciate Commeatus far more than the other Gods. We lost eight men total; one Knight, six Lancers, and one of Dedrick’s apprentices. Dedrick teleported then home that night and reported to the King.

Epic adventures are set in the days of dragons and magic, demons and undead, on a world in this galaxy in a time of great need. The age is debated by grand wizards, renowned sages, and clerics of a dozen races. It took place before the great Over God Wars but during the time of chance, and that is what we will call it—the Age of Chance. Charles, born a crown prince, is the black sheep of the royal family. He makes one necessary decision that destroys his life, causes his exile from his beloved country, and prompts praise as a hero. Charles is led on a dangerous and painful journey to regain his loss, and becomes more powerful and deadly than anyone ever anticipated. In this action-packed epic fantasy, a young crown prince embarks on a adventure-filled quest to become a god.

John Ricks was born in Longview, Washington, and moved thirteen times before he finished middle school. After graduating high school, he joined the US Navy, where he spent twenty more years traveling the world meeting new and astonishing people. His degrees, extensive reading, and travel have helped him see all life in a wonderfully different way and to develop a great sense of fantasy. John loves to tell stories.