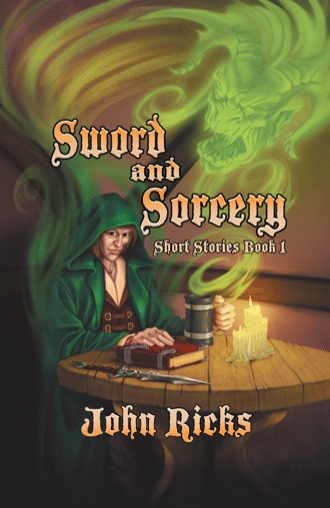 In a land full of magical creatures, dragons fly overhead threatening to unleash a deadly surprise on anyone who gets in their way. As danger lurks in the shadows in a world with its own rules, threats, and resolutions, a group of adventurers seeking different paths in life embark on unpredictable journeys to the truth.

Bard has just lost his entire family to a group of savage adventurers. As he arrives at an inn to rest, the guests beg him to play his harp. When he begins, his songs tell of his sadness—and a secret that leads to a vengeful act like no other. After a druid demands payment from a king for cutting into his forest, the king vows revenge, but not before his daughter attempts to stop him. But little does she know that she is the one the druid wants for payment. As a gladiator stands guard in a royal arena and waits for a battle to the death to begin, he wears no armor, for it is when he becomes invisible that he possesses the most power.

In this compilation of fantasy tales set in a land where creatures eat humans and villagers fight orcs, everyone is about to discover that circumstances are not what they seem.

John Ricks is a technical writer and veteran of the United States Navy, where he spent twenty years traveling the world. His degrees in liberal arts and management, extensive reading, and travel provide him with unlimited fuel for fantasy and science fiction dreams. John is the author of two Freddy Anderson Chronicles novels.