A Long Stretch of Blue 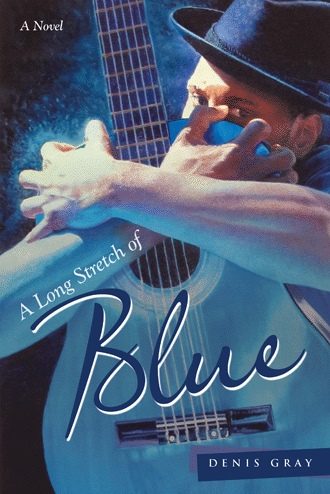 Arfel’s body was on fire.

His eyes were closed, in a trance, tracing this tall, smooth-boned Black woman like she was some Saturday night sin, black magic, a some-kind-of-blues in his soul. His slim fingers playing the blues—pushed-up on Blue Fire. This woman’s soft hips dipped to the B-flat chord. Her bottom sinking low like a too full potato sack. Her hips singing slow on Blue Fire’s guitar strings, quivering long like a low, sweet vibrato.

Sunny’s Blues Shack’s shadows hung like thick drapes swashed in a swamp-heat; about as musty as twenty teamed mules. “Mmmm…” Hummed out Arfel’s mouth like a harmonica’s hum.“Mmmm… ”In this key almost too blue for Arfel’s ears to hear. “Mmmm…”

Her black body moaned back to Arfel while she let her sweet backside dip down even more slowly, evenly into that B-flat chord’s lazy, free-feeling twang. “Mmmm…”

Then “Gin-Water” Pete’s bass guitar, Brown Georgia, belched the blues out her belly like she knew the best parts of a heartbreak night; and that Black woman with her black magic, some kind of Saturday night sin, couldn’t stop from moving her backside back and forth, back and forth on the narrow, mule-musty piece of floor like this too was too good in her for her to stop.

“Oooo—baby, don’t you run off now less you know where to (Humpff!)

Gin-Water Pete’s head then slumped over his guitar as if dead. But the music was still in the dark air, dancing there. And Arfel still smelled the Black woman’s perfume, the sweet sweat in her skin like she smelled of flowers long ago picked out Miss Ann’s garden up at the Big House but knew this was Sunny’s Blues Shack where the blues was so to forget about such things.

Ain’t need no remindin’ how a perty gal look walkin’ out my do’r.

Had to beat you.

Had to beat you.

See—what my blues doin’ to me?”

Arfel Booker is a great young blues musician in the 1940s South. One night, after playing a blues gig in a new town, a beautiful woman takes him back to her log cabin to make love. In the morning (after blacking out from too much liquor), he awakens to an unwelcome surprise. Instead of the woman, an unfamiliar white man is in the bed, and the man’s throat has been slashed with Arfel’s knife.

Arfel knows he’s been framed, so he makes a run for it and heads north by hopping trains. Once a safe distance from the southern town, Arfel makes the acquaintance of Lemontree Johnson, a fellow blues man who helps to reestablish Arfel’s music and him. Despite this spot of good luck, Arfel’s troubles are far from over.

Lemontree is the only person who knows the truth about Arfel’s run from the south and his current state as suspected murderer. All seems lost when a bounty hunter arrives looking for Arfel. Who was that strange murdered white man, and how will Arfel Booker escape the long arm of the law this time?