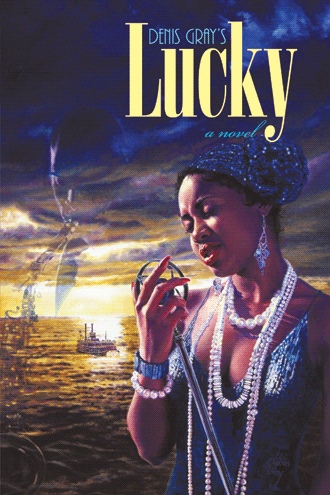 Lucky's long hair was swept up in the back, pinned in place by a decorative Spanish comb. She was in a frilled white dress, white blouse, long black skirt, and black heels. She wanted to look modest, nonthreatening, only her beauty could not be hidden; even if she wore a cloth sack, she still might cause a riot, a "Louisiana incident."

She was nervous again.

The picture was put back on the desk, and Lucky continued looking at it longingly, drawing up memory, time, and place. "At least I got to see Aunt Priscilla, didn't I?" She made it her business to travel back home, to see her aunt and to visit her mother's gravesite.

Then she brightened and laughed and felt a bit merry in a way. For Noble Prince had stashed her away like a precious diamond under lock and key. All the boat personnel were sworn to keeping her a secret from the band, told so directly by Frank Landers. There wasn't to be a peep about her being on board the Morning Queen to any of the band members--or else.

In fact, if anyone noticed that the old baggage room door was painted (shock of shocks!). "You are to say, forthwith: I suppose Seth must've mixed up doors." Frank Landers was heard to say. All the bases, therefore, were covered. All the chess pieces in place. All Lucky was doing now, was waiting on Noble Prince, and it wouldn't be much longer before she stood in the grand ballroom.

It is June 1925, the dawning of a new, spectacular riverboat season, and “Noble Prince’s Red-Hot Rhythm Band” is set to play “hot jazz” on the Mississippi!

Walter Von Bulow, the owner of the Morning Queen, has recently discovered Lucinda “Lucky” Martinson. Lucky’s a talented young jazz singer. Von Bulow hires her in the year 1925, to sing in Prince’s band. But she’s in New Orleans for other reasons: Lucky Martinson’s on a personal “quest” to reconcile her past. Lucky’s left Harlem and her boyfriend Tolliver Williams—a fellow jazz musician Lucky’s in love with. She’s put her personal and professional life at risk in traveling to New Orleans, Louisiana to unbury truths and lies. Lucky’s sucked further into New Orleans’s network of mystery and intrigue once she uncovers these family secrets in a historical city where voodoo and superstition co-exist, and can destroy the people you love.

Noble Prince nurtures Lucky’s singing ambitions, but Victor Malreaux—a young, dynamic trumpet player in the Prince band—nurtures her soul. Victor falls in love with Lucky. But Victor Malreaux as well as Noble Prince are in for a rude awakening from Lucky Martinson; each for diff erent reasons.

Denis Gray is the author of twenty-eight books, four novellas, thirteen plays, and over sixty short stories. He lives in New York City with his wife, Barbara, where they follow their two granddaughters' pursuits with great interest and joy.