Star of the Future 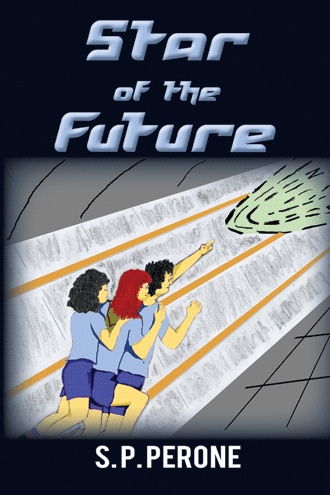 Star saw it. The opening was quite large. They could pass through easily. She looked at Logan. “Should we try it?” Logan nodded. “We’ll have to be careful. Those air intakes—” Before finishing his thought, a bright greenish-white object flew out of the opening! It was moving so fast that it appeared only as a momentary blur in the light beam. The startled trio lurched backwards, clinging to the handrails. Logan recovered quickly and tried to shine his light on the flying object…with little success. “Wha…what was that?” cried Crystal. Before anyone could answer, a blood-curdling shriek filled the chamber. The shrill sound refused to fade, even as the object sped further away. Then, abruptly, the object turned and sped back toward them! Crystal clung to Star, and Star clung to Logan. The white object hurtled at them faster and faster. Then, with a blood-curdling shriek and a loud swooosh, it streaked overhead and through the portal where it had first emerged. “That’s the ghost!” screamed Crystal. “Let’s get out of here!” she leaped away, soaring down the middle of the chamber. Logan followed her and took the lead. “Follow me!” he cried, stretching out like a swimmer gliding through the water. Star was too terrified to speak. She shoved off, joining Logan and Crystal in a mad flight away from the ghostly appearance. Whatever it was…this thing was not friendly!

Fifth-grader Star Bell has a date with Logan, a nosy best friend, and two very big secrets. Logan promises her secret adventures. His promise is broken when Crystal figures it out and wants to join in. Along the way, Star discovers that her other secret might change the world. Star, Logan, and Crystal explore a magical portal to make-believe realms of adventure, mystery, and danger. In a virtual world created by a secret book-reading research computer called SIMMER, they can participate in any storybook adventure they choose. From a turbulent flying carpet ride fleeing an evil magician, to swashbuckling sword fights with lusty pirates, to a frightening encounter with the ghost of an orbiting space station—it’s a dream come true for the three friends. But their fun may come with a catch. Their adventures differ from the storybook versions, and Star suspects their make-believe actions might actually cause harm in the real world. The only way Star can persuade her friends of the potential gravity of their situation is to lead them on a daring adventure of her choice. Risking real harm if she is right, hoping she is wrong, will she reveal the one secret that may explain everything?

S.P Perone has worked in academic and government arenas and was a consultant in the San Francisco Bay Area. He has published numerous technical articles, two textbooks, and six novels. He and his wife live in the Sierra foothills of Northern California. Visit his online at www.samperone.com.