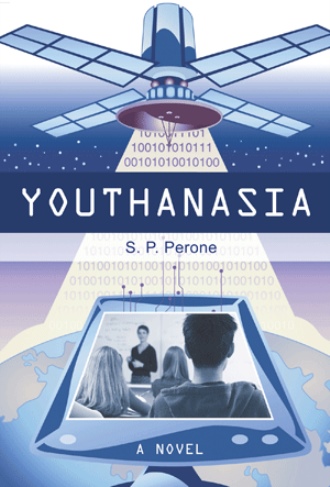 The Senator…pushed himself to a standing position and strode slowly to the side window with the stunning view of fall foliage and, in the distance, the Washington Monument. With hands folded behind him, he looked out the window and said, “These millions of brave men and women—casualties of war—sacrificed willingly so that our country would survive. Do you know why?” Ford had no idea how to answer the man. The Senator turned his head to Ford. “Of course you know why. Because we knew the enemy: the British, the Prussians, the Japanese, the Nazis…whatever. In each conflict we fought for our very survival.” He turned back to the window. “Today we have a very different enemy. An enemy that we can’t see…that we refuse to see.” He paused, looking off into the distance for several seconds. Then he turned and locked in on Ford’s eyes. “The enemy, Dr. Ford, is us!” Ford caught his breath. “That’s right,” he continued, his eyes boring into Ford. “We’re the enemy—our self-consumed nation. Especially the youngsters. They’re too selfish to propagate. They despise the military. They don’t vote. And they resent an older generation that lives off their taxes.” “They resent your generation,” Ford retorted, “because you’ve created the mess—unnecessary wars, pandering to big business, representing yourselves, not the people. Young people don’t vote because they’re smart enough to know it won’t matter.” “Blame whatever you want, but my generation no longer recognizes America. We see a young generation that shirks responsibility and treats us as a burden. We had to take action…drastic action.”

In the coastal mountain area of California, eighteen-year-old Connor Bright is enjoying his senior year at the secluded Teller Academy. But that idyllic scene changes when he witnesses the grisly classroom murder of his twenty-two-year-old history teacher Miss Diamond. It’s a murder that no one but Connor seems to remember.

Connor soon learns that he is the only witness to other events, and this knowledge exposes him and his friends as expendable in some mysterious cabal. But he needs to persuade his skeptical friends—Blake, Sally, and Alicia—that there is something sinister happening at the academy and they must escape to uncover the real reasons they have been secretly cloistered at Teller Academy.

Escaping the school’s mind control scheme and not being able to trust their memories, the teens investigate the mystery at the academy. What they find is a secret group of elders that has become the ultimate Washington power broker. This group hatched a diabolical plan directed at the nation’s youth and will overnight change the entire social and political climate of the United States. The plan threatens an entire generation; the fate of millions of youth is at stake.

S.P. Perone has worked in academic and government arenas and as a consultant in the San Francisco Bay Area. He has published numerous technical articles, two textbooks, and six novels. He lives with his wife in the Sierra foothills of Northern California. Visit Perone online at www.samperone.com.