Be Dead and Be Damned

Murder with Malice in Melbourne 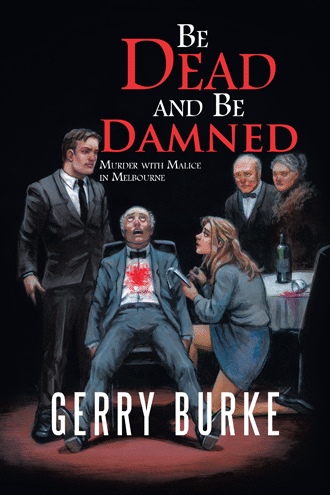 The murder of a controversial figure in a public place creates nervous tension at police headquarters. Chief Inspector Dave Klingendorf and his offsider from the Homicide Squad, the enigmatic Rachel Lyons, fight to keep the case alive while others try to bury it.

The underbelly of one of Australia’s most sedate and conservative cities is uncovered to reveal dark secrets and gruesome revelations. The investigators look to the growing mafia influence in the city while those in Chinatown ponder the possibilities of extending their power base.

Gerry Burke was born in Healesville, Victoria, the home of one of Australia’s quirkiest animals, the platypus. He was educated at Xavier College, before taking-on an accountancy course while employed by an international mining company. This was a commitment that lasted for twelve years, partly spent in New Guinea. Dramatically, the author then switched careers and joined an advertising agency in Melbourne, as a copywriter.

Gerry’s advertising career took him to Britain, America, Hong Kong, Singapore and a number of Australian cities. He was employed by some of the world’s largest ad agencies before branching out and starting his own company on his own terms. GerryCo provided advertising, marketing, film and video production to local and overseas clients.

In parallel with these activities, Gerry maintained an on-going interest in the thoroughbred horse racing industry, as an owner and breeder. Today, he continues this love affair, which has outlasted his dedication and devotion to the world of advertising. With friends, he has raced over twenty thoroughbreds.

The author’s humorous stories and commentary were first made available for general consumption in 2009, with the release of his first book, From Beer to Paternity. A number of short story collections followed, in which the ubiquitous discount detective Paddy Pest was introduced to the unsuspecting public. The Hero of Hucklebuck Drive was the author’s first novel in 2015 and Be Dead and Be Damned will be his fourth. Six of his books have received international awards in the categories of General Fiction, Humor and Science Fiction.

Gerry is single and lives in Melbourne, Australia.