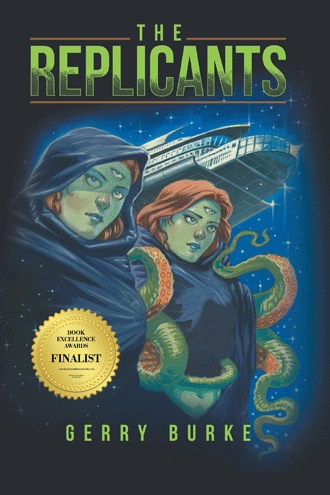 THEY COME IN PEACE, OR SO THEY SAY.

Planet Schmoo is so far into outer space it is the last stop before heaven. When a cataclysmic seismic intervention decimates their world, the Schmooans look for refuge on Earth and a continuation of the lifestyle to which they are accustomed.

Homeland security agent Calvin Swift and his girl-friend, the alluring Alicia Angelico, already have their hands full with interstellar visitors. The once-in-a-millennium Intergalactic Games are in full swing and now they are alerted to alien refugees and their potential to replicate at will.

From the first splashdown in the Hudson River, the visitors also make their presence felt in France, Switzerland, Indonesia and Mongolia. These creatures are smart, inventive and very athletic, and when their intentions become obvious, even President Daphne Doolittle is at a loss. She doesn’t know what to do.

This fast-moving humorous narrative pits the superior intellect of the aliens against the gritty determination of one man and his lady, with a little help from his British counterpart, the suave MI6 agent, Bulldog Bartholomew. With the fate of the world at stake, who else would you turn to?

Gerry Burke was born in Healesville, Victoria, the home of one of Australia’s quirkiest animals, the platypus. He was educated at Xavier College, before taking-on an accountancy course, while employed by an international mining company. This was a commitment that lasted for twelve years, partly spent in New Guinea. Dramatically, the author then switched careers and joined an advertising agency in Melbourne, as a copywriter.
Gerry’s career in advertising took him to Britain, America, Hong Kong, Singapore and a number of Australian cities. He was employed by some of the world’s largest ad agencies before branching out and starting his own company on his own terms. GerryCo provided advertising, marketing, film and video production to local and overseas clients.
In parallel with these activities, Gerry maintained an on-going interest in the thoroughbred horseracing industry, as an owner and breeder. Today, he continues this love affair, which has outlasted his dedication and devotion to the world of advertising. With friends, he has raced over twenty thoroughbreds.
The author’s humorous stories and commentary were first made available for general consumption in 2009, with the release of his first book, From Beer to Paternity. A number of short story collections followed, in which the ubiquitous discount detective, Paddy Pest, was introduced to the unsuspecting public. The Hero of Hucklebuck Drive was the author’s first novel in 2015 and The Replicants will be his third: his first foray into the world of science fiction. Five of his last six books have received international awards.
Gerry is single and lives in Melbourne, Australia.