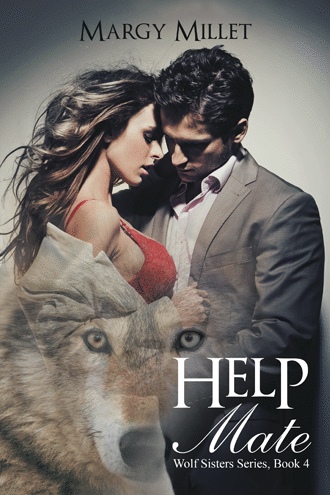 Enrique Moreno is hurting. He has lost both his twin brother, Andrés, trying to save their best friend and lover, Ari, a wolf shifter, from a rival pack. Then he lost Ari to the pack’s leader. And now he has lost his mind over the she-wolf named Dr. Adena Oates.

Enrique has been having inexplicable dreams about the beautiful woman, whom he barely knows. She’s a member of a pack in Sedona, Arizona, one that Ari and her sisters, Pi and Cris, have recently joined. Although Enrique is human, his desire for the wolf shifter is beyond anything he has ever felt before. Even so, guilt and heartache hold him back. Can he find the happiness he doesn’t believe he deserves after the tragedy of his brother’s death, and can he overcome the fear of having a wolf mate? The decision he must make may bring him either a lifetime of joy or else one of regret.

Margy Millet is the author of fourteen novels. Born in Arecibo, Puerto Rico, she moved with her family to Worcester, Massachusetts, in 1973. She holds an associate’s degree from Quinsigamond College, and she and her husband, David, have three children and five grandchildren. Her passions include writing, Latin music, dancing, reading, and sports. She currently lives in Massachusetts.