My Vampire, My King 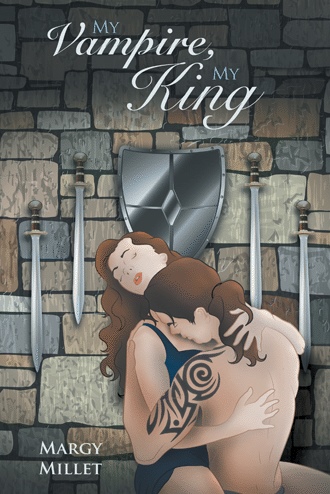 Elena made it to her house in just ten minutes. Her father had sounded so desperate on the phone. As she rushed into the house, she detected the thick, metallic smell of blood. “Dad,” she called. She didn’t get an answer. “Dad,” she called out louder.

“Up here,” she heard him gasp weakly.

She ran upstairs to her parents’ room. The door was wide open. She turned to where the scent was coming from and saw her father sitting up in bed. She ran to him, kneeling in front of him. “Oh my God, Dad what happened?” she wailed.

“The enforcers found me,” he said as blood splattered from his mouth.

“Don’t speak,” she murmured with tears rolling down her face. “I’ll get a cloth,” she said moving toward the bathroom.

He started to say something, but instead he coughed up a bit more blood. Elena moved with vampire speed to the bathroom and got a wet washcloth. As she gently cleaned his mouth with the cloth her father grabbed her hand and took the cloth from her. “Honey, sit,” he ordered.

She looked at him for a few seconds then sat down next to him. He dropped the cloth on the bed and took one of her hands between his.

“Listen carefully,” he said in a low voice.

“Dad, we can talk later. Let me take care you,” she whispered.

He took a strand of her hair in his hand and softly caressed it.

“I’ve always loved your hair. I remember many times trying to comb the tangles out of it, then putting it in a braid.”

“Elena stop. Listen to me.”

She wanted to say more but stayed silent as he asked. He coaxed her head with his hand and settled it on his shoulder. Elena held his hand tightly.

“I have to go. If the enforcers find out I have a family, they won’t stop at anything to hurt you all. No one can know you two have Fae blood—ever.” he whispered.

He let go of her, yanked the pendant necklace from his neck, then took one of her hands and dropped it onto her palm.

“Hold on to this. If you are ever confronted with one of my people, show them this. They will know you’re my blood.”

“Dad, no,” she said pushing the pendant towards him.

“Elena, this has been in my family for generations. It’s yours now,” he barely uttered these words as another bout of coughing stopped him. She held on to him tightly; his whole body was trembling now.

“In the strongbox you’ll find money and documents for another house. Move the family away from the Arkady vicinity. You’re older now, if he finds out about you he’ll take you from your mother and sister. Do everything possible to prevent that from happening.”

She just stared at him. He tugged at her chin with his fingers, forcing her to look at him, “Do you understand?”

“Elena,” he yelled, “Do you understand?”

“I have to go. Everything you need is in the strongbox.”

She slid off the bed and helped his stand up. He wrapped her in his arms, holding on to her for a few minutes. Then he stepped back and together they slowly walked out of the bedroom and down the stairs into the kitchen. He stopped and moved away from her, giving her big smile. “Go get your mom and sister, then don’t waste any time and move the family to the new house.”

He stopped her from talking by raising his hand. “Elena, do as I say, please. Everything is explained in the documents.”

“Okay,” she said with more tears rolling down her cheeks. “Let me get you to where you’re going.”

“Go to your mom and sister. Take care of them.”

“I love you honey,” he said hugging her one last time.

He opened the back door and walked out. She started to follow him, “No, don’t follow me. Get Iskra and Ayla, find the strongbox, and follow the instructions in the documents. Goodbye sweetie,” he said stepping out into the darkness and breaking into a fast run toward the woods.

Elena stood at the open door for a few minutes, then closed the door and locked it. She walked out of the kitchen, down the hall, and out of the house. Slowly and calmly, not wanting to attract any attention, she got into her car and drove away.

Elena discreetly looked around the airport for any signs that she had been followed. Slowly, she walked towards the baggage-claim area. She stood there in the middle of the crowd, trying to fit in as she waited for her baggage to come out. After waiting for some time, she spotted her two bags and quickly pulled both of them off the conveyor belt.

She moved very cautiously, trying not to bring any attention to herself. She pulled the handles out and tipped the luggage on the rollers as she walked out of the airport building. It was still dark outside but she knew dawn would be approaching soon. She quickly found the pickup stop where she could catch the van that would take her to the car rental location. She got in the van and sat down, observing everyone around her. She got her car and drove off towards what could possibly be her last event planner assignment——an assignment forced on her by her pack leader who was cruel, vindictive and heartless. She knew she had to do the job because her family’s lives depended on it.

She closed her eyes and took a deep breath, letting it out slowly. She remembered her life back in Russia, full of bumps and obstacles and so many secrets, but no matter what life had thrown at her, she was able to succeed. Now with this assignment she could lose her life, or worse, the lives of her family. She hated that Arnav literally twisted her arm to take this job. Elena didn’t put much value on her own life, but she was going to make sure her family survived.

She put some music on and focused on her driving. The drive would be long but it would give her the time she needed to go over her plan again. Right now, she needed to find a place to rest before daylight came. She knew she had maybe two hours before dawn. She used the car’s GPS to locate a nearby motel. She drove to the motel and got a room, making sure to pay for everything in cash. When she got to her room, she took a quick shower and got settled in for the day.

Elena knew she only had two months to carry out her orders or her Mom and sister would be killed. She went over the plan in her head again and again. She kept thinking about the exact moment she had come face to face with him. For every event that she planned, she always tried very hard to keep away from him. But when her agency won the bid on the king’s mating ceremony, they offered her this great opportunity.

She never expected that the leader of her vampire pack would find out about it, and she definitely didn’t count on him discovering her family—a family that she had kept successfully hidden for many years. Elena yawned; the daylight drowsiness took over her and in minutes she was asleep.

Elena has been given an assignment by her vampire leader—to kill the Vampire King or her family will be eliminated. She goes undercover as a wedding planner for the Vampire King’s mating ceremony, and unexpectedly finds passion in the arms of a tall, mysterious vampire named Bash. Nothing has prepared her for the smoldering desire she feels when he touches her.

Elena keeps her distance from Bash, but how long can she sacrifice her craving for him and her burning thirst for his blood? For both Bash and Elena, this is a very inconvenient time to fall in love. She cannot allow herself be distracted from her plan to get her family to safety. He is about to be mated in a politically advantageous match.

Elena and Bash keep many secrets from each other. Bash is actually Sebastian, the Vampire King she was sent to assassinate. Besides being an undercover assassin, Elena has both vampire and Fae blood in her veins—a potentially lethal combination.

Will Elena’s assignment end in the death of her kind or bring her together with the love of her life?

Margy Millet is the author of five books. She was born in Arecibo, Puerto Rico in 1958, and currently lives with her husband, David, in Worcester Massachusetts. They have three children and five grandchildren. Her passions include Latin music, dancing, and sports. She is currently working on her sixth novel.