A Spy in Nightfall 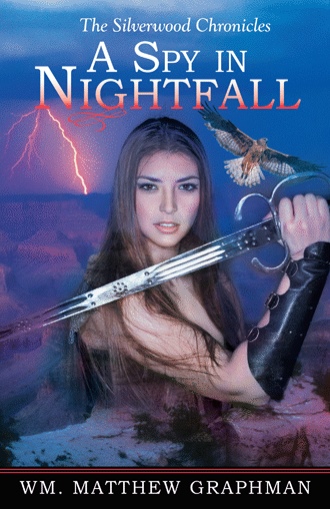 "You think Guntharr will believe what we found?" A priestly robed figure asked of his furry, four-legged companion.

Rift, the bluish-gray haired battle wolf, stood next to a stack of barrels pondering the question that had been posed to him. "I suppose. It all depends," he replied finally.

"Come on out and face your doom," a deep, gravelly voice echoed over the wall of barrels.

"On what?" The priest replied to his companion ignoring the threat.

A loud thudding sound rang out as something on the other side of the wall of barrels pounded away against them. Rift and Firebane looked up and watched the uppermost barrels sway from the impact, but because they were full of wine, dried meat and pickles, they were not easily knocked over.

"You're only delaying the inevitable," the gravelly voice on the other side called again. "There's no escaping me. You will face me and die."

Rift lazily tossed his head in the general direction of the taunting, "if we make it out of here alive, of course."

"What are the odds of us running into a rogue battle wolf on the outskirts of Winters Run?" The priest casually continued the conversation ignoring the threat.

The priest shrugged in response.

"How was I supposed to know we'd be intercepted by a battle wolf on our way back from the library?" Rift asked his own question.

"There appears to be so few of your kind left, I just supposed that you kept close tabs on one another," he said with a half smile.

Rift turned his head sideways and his ears stood up in a questioning fashion. "What gave you the idea that there were only a few of us left?" He asked. "Is there a problem with simply keeping to one's own place in life and staying out of the affairs of men?"

"I guess if you put it that way," Firebane responded.

Firebane looked in both directions. Here they were, stuck in the corner of a large supply depot with barrels stacked on one side and a stone wall on the other. Firebane tried to concentrate to come up with a plan when another loud thud caused the barrels to shift and the upper most part of the stack to sway dangerously.

"Okay this is getting serious," Firebane said.

Rift looked over at him. "Getting serious? Where have you been?"

Firebane looked around. They were definitely cornered. They had wandered into the warehouse with the hope that the battle wolf and his handler would pass it by. They had been chased since they left the library. Firebane was hoping that this would provide adequate cover and options, but he managed to get them cornered instead.

"Can you phase through the barrels and distract the wolf while I climb over the top?" He asked.

Rift shook his head. "Not enough room to get a start, I have to be moving, plus I don't know how far to jump, I could end up phasing into another wall of barrels."

The next strike caused the top couple of barrels to skid off slightly and hang ominously over the two.

"That's does it," Rift gripped and let out a terrific howl. The sound started out like any normal but quickly grew in intensity. As it did, the barrels, floor and wall reverberated with the sound. As the sound grew, so also did the wolf. Rift’s form grew larger and larger until he stood almost as tall as the priest.

As the echoes of the howl died away, they were replaced by evil laughter coming from the other side of the wall. "Cinder, it looks as if you're going to get to play with someone of your own kind."

"I take it that's not good?" Firebane asked.

Before Rift could reply, a loud screeching sound rang through the room and through the seams where the barrels didn't come together completely a bright orange glow appeared for a moment before an explosion of immense intensity, caused several barrels just above Rift and Firebane to blow apart, spraying the two with a combination of pickles, fish and wine.

This was more than the stack could handle and with several barrels now missing the rest began to tumble down.

Instantly, the two leaned into the tottering wall and pushed. Firebane strained as he put his back against the stack and braced his legs against the wall. Rift, in his massive form, stood up on his hind legs and fell forward putting most of his weight in his upper body.

Saying a quick prayer under his breath, the wall began to yield and sway the other direction. The cascading affect was magnificent as barrel upon barrel surrendered to gravity and tumbled onto the other side.

"Look out," the handler's voice called out as the barrels smashed into the floor and nearly crushed him and his battle wolf.

Firebane and Rift leaped over the remaining few barrels and starred face to face with their opposing counterparts.

Human stared at human and battle wolf stared at battle wolf. Firebane quickly drank in the situation and realized that the massive explosion couldn't have come from the human for he was clearly some form of barbarian and likely had no practical knowledge of magic. The battle wolf that glared with bristles raised sported a red and black coat. The creatures eyes were red as well. A quick glance over at Rift indicated that the battle wolf while focusing in on the situation was not as overly anxious to jump into the fight.

"Let me say thank you for making it much quicker to come out from behind that wall of barrels," Firebane said mockingly. "Rift and I were simply dreading having to walk all the way around to say hi to you two."

"Rift?" The gravelly voice of the battle wolf Cinder coughed. "Is this really the legendary Rift of clan Thunderpack?"

Firebane was caught off guard by this. "Legendary? I wouldn't exactly . . . "

"It is I," Rift snapped back. "And by the customs of our kind, I condemn this unprovoked attack and as clan lord, I order you to return to clan Firepack."

The human barbarian laughed at the dialog between the two foes. Holding out a massive sword in the direction of Firebane, he chided his companion. "What do you say, Cinder? Should we listen to this clan lord and run away like children?"

"I am not bound to this Thunderpack artifact," Cinder slowly began to crouch.

"Brimstone, will not be pleased when he hears that a rogue pup of his has broken a generations long peace between our clans," Rift spoke with full authority.

"Brimstone," Cinder barked, "is a tired ancient like yourself. He has lost all honor and has turned our clan into a collection of do nothing worker dogs." Cinder straightened up. "I do not fear him. For he will never hear of your demise or that of this meager human."

Firebane had known Rift for a long time, but there was still much about him that he didn't know. He had heard of the clan before, but he never knew that Rift had been or was a clan lord. This was an amazing revelation and something he would have to inquire deeper into, after they managed to get out of this situation alive.

"Well, now that the wolves are acquainted, I might as well introduce myself," Firebane said trying to defuse the tension that was building between the two.

At this, Firebane noticed that the battle wolf crouched way down and began to glow a bright red. As the intensity of the light grew he heard the familiar screeching sound that they had heard just moments before the barrels exploded above their heads.

Six months have passed since Taya, Guntharr and the others recovered the damaged Talisman of Alterian, the only hope to proving that Taya is the rightful heir. With little to go on, Firebane sets out with Rift for a distant monastery where the elves stored copies of their ancient writings. Uncovering a potential lead, the two make their way back to the sanctuary when they are ambushed by a barbarian and rogue Battle Wolf who knows of Rift.

Elsewhere, a faction of elves that survived the assault on Silverwood, struggle against an unknown plague that is threatening their outpost’s existence by killing off the crop that they use to sustain themselves. While trying to hold off increasing attacks from the dark creatures of Nightfall and with little men to spare, General Alderthorn sends out a trio of men, led by his only son, Farrian, to search out a gifted spy who can infiltrate the land and discover the source of the plague.

Guntharr’s suspicions are aroused as rumors have surfaced throughout the five realms that certain elf groups have forsaken the kingdom of Silverwood and pledged loyalty to no one. Farrian’s pleas for help conflict against Guntharr’s commitment to protect Taya, but then news from Firebane hints that the next piece to the Talisman may reside in Nightfall. Arnethia’s drive to prove herself causes Guntharr to relent and follow the elves back toward Nightfall knowing they could be walking into a trap.

Without a plan, Arnethia hurries off on her mission into the land of Nightfall to uncover the whereabouts of the gem and possibly the cause for the plague effecting the General’s outpost. Her persistence pays off, but in the process she is captured by a pair of creatures that have the ability to change into any living creature.

Captured and surrounded by an army of evil, Arnethia must rely on a newfound resource to help her overcome her fear, save her friends and return the second gem of the talisman.