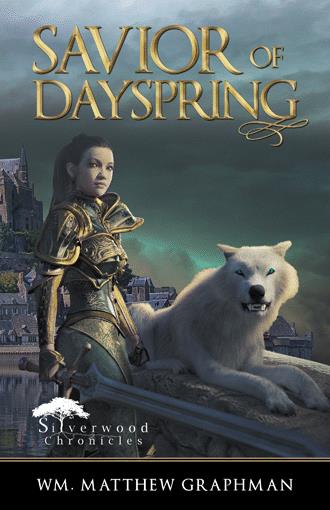 The end is near. The mastermind has decided to reveal himself at long last. Spire Tree, the fortress of Silverwood, has been destroyed. An invading army of Talicrons, like no one has seen before, is marching toward Dayspring’s capital city, Fairhaven. With the Guardian Corps destroyed, nothing can stop the forces of darkness from overrunning Teradandra. Guntharr, Firebane and the other’s attempt at locating the last piece of the talisman has stalled. Rift and Raskin have returned home, their adventuring and fighting days behind them. Taya alone still has hope and a good guess where to go next. Striking out on her own, Taya sets out to prove to herself and the others that she is ready to take on the title of Silverwood’s Heir. Traveling back to her and Guntharr’s original home, Taya encounters the unlikeliest of allies in the form of a young red dragon. But even the dragon is not cunning enough for Wilstrom and his conspirators as they intercept Taya just as she recovers the final gem. Imprisoned and alone, Taya has only one hope left, faith that her companions can find her. But how will they do that, when even she does not know where Wilstrom has taken her. With the looming Talicron threat, time is not on their side. For one member of the group, time is up.

Matthew Graphman is a twenty-five-year veteran in the information technology world. He studied writing, drama, as well as computers while attending Bob Jones University in the late 80’s and early 90’s. There he met his wife, Wendy, of twenty-five years and started a family. He currently resides in Bloomington, Indiana with his wife and children, Kathryn (Kat) and Ethan. His oldest son, Sean, is married and lives on the East Coast. Matthew has long been a fan of fantasy fiction. His first attempt at writing was brought on by his roommates in college. As a result, he wrote his first - still unpublished - fantasy novel. After graduating, Matthew continued his writing exploits, but his focus was mostly around theater. After developing a series of children’s skits in the 2000’s, he was encouraged to take the skits and convert them into a series of children’s chapter books. To date, he has written five of the fifteen stories in the “Chel & Riley Adventures” series. Taking a break from creating children’s fiction and drama, Matthew decided to reach back, at the request from his daughter Kat, and create a fantasy world that mixed all of her favorite thematic elements. This series is currently outlined to cover five volumes; however, he is convinced that there could be many more stories that evolve out of this new universe. Matthew is a recent winner of the 2016 and 2017 NaNoWriMo challenge. He is currently working on a board game based upon the Silverwood story along with several other projects.