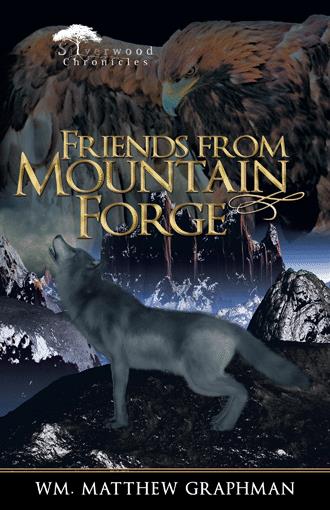 The key to finding the next piece of the talisman is lost. Rift and his family of battle wolves are formally banished. The church at Brittle is destroyed. Guntharr, Taya, and the others look for a sliver of hope as the thread holding their quest together begins to fray. Raskin, Taya’s life-bound hawk lord, falls into guilt and depression over a past he has kept hidden for too long. Driven by concern for their friend, the companions turn their attention to Eddiforth and the Mountain of the Hawk Lords to seek resolution for their friend. What they discover is a plot by the hawk lord council to start a war with their neighbors, the battle wolves. Events spiral out of control as Raskin is captured along with Guntharr, Taya, Firebane, and Farrian. The alpha hawk lords launch an all-out attack on the unsuspecting battle wolves of Clan Firepack, but the alphas are not going to it alone. Alpha Plass has secretly enlisted the aid of the sorceress, Naranda. Her role is to guarantee the war and see to it that the rise of Silverwood never happens. Plass seals the deal by turning over the red gem of power. Its discovery coincides with the alphas’ orchestrated extermination of a certain caste of hawk lords. Tensions rise as Raskin discovers the truth about the events leading up to his rescue by Silverwood’s princess. As he prepares for the ultimate fate, the sudden appearance of an impossible hawk lord gives him the strength to forgive himself and a new courage to move forward. Ghosts from Rift’s past surface as former students seek to settle a score with the old battle wolf. To save his friends and lay the lingering guilt he has carried to rest, Rift agrees to a fight to the death with the four rogue battle wolves. With the clouds of war looming, Silverwood’s friends from Mountain Forge prepare to sacrifice everything to save Taya and keep the hope of Silverwood’s return alive.

Matthew Graphman is a twenty-five-year veteran in the information technology world. He studied writing, drama, as well as computers while attending Bob Jones University in the late 80’s and early 90’s. There he met his wife, Wendy, of twenty-five years and started a family. He currently resides in Bloomington, Indiana with his wife and two children, Kathryn (Kat) and Ethan. His oldest son, Sean, is married and lives on the East Coast. Matthew has long been a fan of fantasy fiction. His first attempt at writing was brought on by his roommates in college. As a result, he wrote his first - still unpublished - fantasy novel. After graduating, Matthew continued his writing exploits, but his focus was mostly around theater. After developing a series of children's skits in the 2000's, he was encouraged to take the skits and convert them into a series of children's chapter books. To date, he has written five of the fifteen stories in the "Chel & Riley Adventures" series. Taking a break from creating children's fiction and drama, Matthew decided to reach back, at the request from his daughter Kat, and create a fantasy world that mixed all of her favorite thematic elements. This series is currently outlined to cover five volumes; however, he is convinced that there could be many more stories that evolve out of this new universe. Matthew is a recent winner of the 2016 and 2017 NaNoWriMo challenge, and he is working on the fifth and final installment in the Silverwood Chronicles series.