Back to Troublesome Creek

Encounters in Developing Countries, Washington’s Bureaucracy, and on the Farm 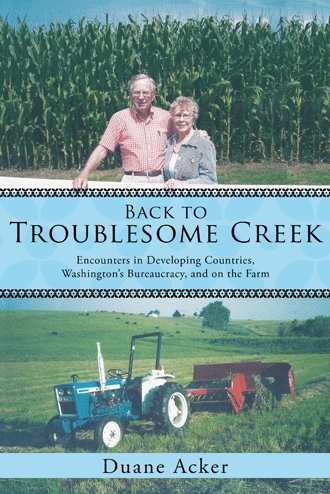 Shirley and I were in a tiny village near the city of Anand, Kaira District, State of Gujarat, on west edge of India. There would be a free movie in the town park that evening, but our focus was on what was happening at a milk receiving station before the movie would begin.

We had learned of the Kaira District Cooperative Milk Producers’ Union, credited with not only achieving an extraordinary increase in milk production and consumption in the Anand area, but demonstrating for the rest of India that it could be done. We wanted to see for ourselves what had brought about such a dramatic increase in milk production in a nation of a billion people, of which nearly two thirds were small farmers.

Credit for much of the success of the Kaira District Milk Producers’ Union had been attributed to a Dr. Vegrghese Kurien, who, by coincidence, was at that time headed to Washington and Des Moines to receive the World Food Prize for his efforts. We only regretted that our visit to his home base was at a time of his absence.

We stood that Sunday evening near the entrance to the Kairi Cooperative milk receiving station, watching men and women get in line to deliver their day’s milk production from their cow or water buffalo. Most carried a covered metal pail; others had metal or crockery containers balanced on their heads. At the milk receiving window, their container was emptied into a weigh vessel, and they moved on toward a short line at a second window. In the meantime, a small milk sample had been taken from the weigh vessel for an instrument that, by what is called electrophoresis, measured the percent of fat and non-fat solids in the milk. Less than two minutes later, the value of each person’s milk having been calculated, each received at the second window a slip of paper showing milk weight and composition, and their payment in cash or paper money.

Then they would enjoy the movie.

Kurien and his colleagues, in developing this cooperative and its system at the local level, had harnessed the motivational value of immediate feedback. Each person knew their day’s milk production and composition, and each left the station with coins to spend. There was also competition, each saw how his or her milk and payment compared with their neighbor’s or friend’s.

Could there have been more effective motivation to increase production?

The reckless speed of a small car leading a cloud of road dust yet a quarter mile away pulled my eyes off the blinking lights of the corn planter monitor. I was making the first pass around the field, planting the six “end rows” along the field edge.

This otherwise rarely-used township road, dirt the first three quarter mile toward an intersection at the corner of our farmland, and gravel past our farmland, was now a busy, informal detour. As the car passed the intersection and hit the loose gravel, it began to fishtail. Watching the fishtail rhythm, I thought, “He’s going to hit me.”

There was no field fence, only a shallow ditch between the roadway and my big Case 2290 diesel, its faded yellow and orange reflecting its thirteen years, and my new forty thousand dollar tiller, fertilizer applicator, and planter.

If that little Plymouth should fly across the shallow ditch and hit my four tons of steel, seed corn, and liquid fertilizer, there might be nothing left but crumpled plastic, glass shards, and a bare chassis. Perhaps Monday’s Kansas City Star or the K-State Collegian would carry a small item, “Former K-State Head Injured in Cornfield Collision.” It would be more a human interest story than hard news.

He had lost it; the Plymouth was airborne! But, it was in the air only a few seconds. Its right fender hit the ditch bank below where the fence had been, it did a double reverse somersault, and, by some miracle, landed squarely on all four wheels, inches behind my planter and facing the direction from which it had come. Had it been in the Olympics diving competition, it would have earned at least a silver medal.

I shoved the Case into neutral, jumped down from the cab, and raced back to the settling dust. The car’s rear hatch was open, two windows had popped out, and a clear plastic bag containing what appeared to be a tuxedo and shirt was lying on the ground.

I had expected to find a bleeding driver under one of the wheels or, perhaps lying lifeless over in the ditch. However, still in the seat, shaking, and clutching the steering wheel with both hands, was a boy of about sixteen. I would learn he was on his way to Atlantic to return the tux he had rented for his Friday night Junior-Senior prom in Anita, then to his five o’clock job at Burger King. He had not left home early enough and feared he would be late for work.

By that time the dust had settled, “Do you need to call someone?”

I ran back to the tractor, reached up into the cab for my portable phone, then yet a half-pound instrument.

Still in his seat, “Mom, I just ruined your car.”

Fortunately the car was not a total loss. The boy was shook, but physically O.K. My corn planting was delayed only for the time it took to make phone arrangements for him and the car.

We finished planting the field about midnight. 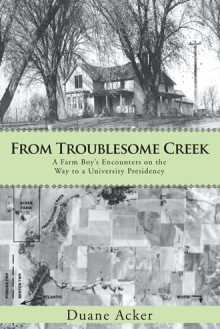 A former university president tells about his later encounters in the federal bureaucracy, including an agency with more people than work to be done and how “special projects” get included in appropriation bills.

He also relates global encounters, including a four-acre Philippine farm that financed two children through college, Guatemalans being paid with food aid for digging the trenches for their sewer system, a Bolivian farmer proudly showing his harvest of drying coca leaves, and Eastern Europeans’ difficult transition to free enterprise.

Back in Washington, he describes political pressure to finance a cigarette manufacturing line in Turkey and a pork research center in his home state, and how membership in his home town country club risked his nomination to be assistant secretary of agriculture.

Returning to operate his home farm yielded more anecdotes, including a near collision in the cornfield with a somersaulting Plymouth, potential embarrassment of dragging an implement’s tongue mid-field, and the obstacles in building an egg layer facility that now employs twenty eight local people.

Duane Acker studied animal husbandry and served at five universities before becoming president of Kansas State University. He then served six years in Washington, including administrator of the Foreign Agricultural Service and as assistant secretary of agriculture, before returning to operate his Iowa farm, where he and his wife live.