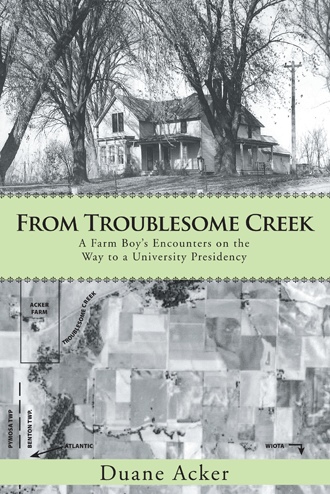 From the Forward — Life Lessons

Before embarking on the story, itself, I should say that as others and I reviewed the manuscript, we were struck by the number of valuable life lessons to which I was exposed. Lessons came from many actors and in many situations, even some from the study of my ancestral lines. And, some came simply from the circumstances of the encounter. There are lessons for growing up, lessons for parenting and teaching, lessons for handling failures or disappointments, and lessons for leadership and management. Most are lessons of universal value.

Here are just a few of the lessons, including key phrases from the text:

Give your children your time: “— though lodge was important in his life — it would take a back seat to the school and our activities —.”

See that single or handicapped people are included: “— as we left the farm and headed up the snow-covered road (he said) ‘This afternoon and evening with your family makes life worth living’.”

Avoid ultimatums: “When someone says to you, ‘Do this or else!’ they better be prepared for ‘or else’.”

Impatience increases risk: “— impatient, I shifted from reverse to third and pulled open the throttle. — In seconds — my right wheel was off the ground — it was rolling —.”

Take advantage of the opportunity before you: “I spotted those soft pink lungs and extending trachea. For our science class to see real lungs the size of a human’s —!”

When you need help, someone is willing to provide it: “— it was clear he did not need an interruption, but I told him my problem. Clarence did not hesitate. He just dropped his tools and said, ‘Let’s go.’.”

Before changing careers, find out if that other career will provide what you want: “If I wanted to be in the feed business — I need not look further. However, throughout the day, I had a steady, deep-down feeling of discomfort, ‘What am I doing here?’.”

A team of bright people can achieve much: “When these four fellows got their heads together, good ideas emerged. In this case, (the swine) industry’s needed change was markedly accelerated.”

Always look at the data, the facts: “— as the data were presented and discussed, the finger pointing and defensiveness disappeared, and we moved to interpreting and discussing the data’s significance. — The low pheasant count was just part of a normal cycle.”

As you read through the book you will find more lessons. Some came almost as commands, such as “Never give up!” A few were so offered so subtly that only in later years did I recognize they were, in fact, lessons I had used.

From the section, Work, Pride, and a Typical Day

What was my typical day late in those WWII years? Sometime before 6 a.m. I would hear Dad’s broom handle tap the floor register of my second floor bedroom from below. That bedroom’s cold was tempered only by heat that rose through that register from the dining room below. The house’ first floor was heated by a wood and cob-fueled furnace in the basement.

I would jump out of bed, discard my pajamas to a chair and step into my shorts and jeans on the floor. In two other quick moves my undershirt and flannel shirt would be in place. Then it was down to the basement for a sweatshirt and bib overalls from the nail on a support post. In January, that second layer was essential, and over those I donned an insulated “army surplus” jacket (I always thought it strange that “army surplus” clothes were available well before the war was over.). I then grabbed a lined corduroy cap, complete with ear flaps.

Dad and I would each carry two washed milk pails to the barn, slide open the barn’s “driveway” door just enough to squeeze in, flip on the light, and greet my dog, Sandy, stretching from his warm spot in a pile of hay. Dad would turn on the radio for the morning war news, grab a milk stool and sit down beside the first cow. I would open the door of the small grain bin, fill a bushel basket with ground corn and drop a hand scoopful in front of each of the 12 cows that had spent the night in the barn.

By 6:30 we would be carrying four buckets of milk down the house basement steps to the cream separator. By 7 o’clock, the freshly separated cream poured into a five-gallon can and the skim milk carried to the hen house, we would be washed and at the breakfast table, usually for fried potatoes and two eggs, sometimes also sausage or bacon. The cream was destined for cheese-making at the nearby town of Exira, a 5-gallon can picked up three times per week by a contract hauler.

At 7:45 my sister and I would be at the end of the driveway waiting for the school bus. Through the war that bus was still a wooden body on a mid 1930s Chevy chassis. Those near the front of the bus got whatever heat passed by our gregarious driver, high school senior Lester Phillips.

From the section, Why is He Telling Me all This?

My dean, Floyd Andre, and I were in the back seat of a little French Citroen riding across the Pampas (grassland plains of Argentina). My department head, Leslie Johnson, was up front, conversing in a mix of English and Spanish with our driver, an assistant minister of agriculture. We were in Argentina as curriculum advisers for a dozen agricultural high schools, some run by the Ministry of Agriculture and some by a Catholic order, the Salesian Fathers. It was late at night and we were driving from one school to the next.

Andre spent most of that three-hour ride telling me about personnel problems he had dealt with at both the University of Wisconsin and Iowa State. The cases varied widely: A faculty spouse had asked him to intervene in a case of infidelity. A staff member had billed a university account for fertilizer applied on his personal farm. A former president had once given him oral instruction to fire a department head. He also described a staff problem in his own office.

I listened, but wondered, “Why is he telling me all this?” I was just a young associate professor, and some of the cases involved senior colleagues whose offices were just down the hall from mine.

We returned to Ames late on a Friday. In my office mailbox Saturday morning was a letter from Kansas State University inviting me to consider a position there, associate dean of agriculture for instruction and student advising. Andre knew — though I did not know — that I was going to receive that letter. He was coaching me for that job. 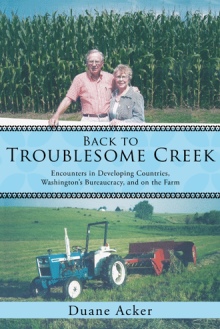 Back to Troublesome Creek
Duane Acker
$22.95

Near the banks of Troublesome Creek in Cass County, Iowa, a boy happily grows up on his family’s farm in the 1930s and 1940s. He helps his father milk cows and harvest hay, reads newspapers, and listens to radio serials. But it is when he is seventeen and hears his mother excitedly shout, “You won!” that everything suddenly changes for Duane Acker.

In his engaging memoir, Acker begins by chronicling his early life, leading up to the moment when his mother told him he had won a sizeable college scholarship, ultimately transforming the course of his life forever. As he shares anecdotes from college, his teaching years, and his university leadership roles, Acker offers a glimpse into the characters he encountered along the way, including a beloved school janitor, a wise associate dean, and a decisive governor. Acker also shares fascinating “extracurricular” experiences, such as dining in the White House next to the President’s wife and reviewing the impact of the post–World War II Marshall Plan as a guest of the West German government.

From Troublesome Creek takes a compelling journey through a farm boy’s coming-of-age experiences and life lessons that continue through his unexpected path in life.

Duane Acker studied animal husbandry and served at five universities before becoming president of Kansas State University. After a lengthy academic career, he served as United States Assistant Secretary of Agriculture and worked in a dozen countries before returning to operate his Iowa farm, where he and his wife live today.