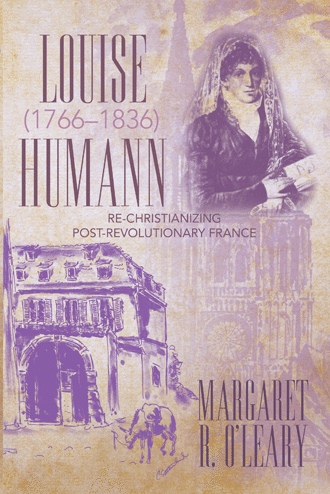 Upon Mademoiselle Louise Humann’s death in 1836, a distraught Abbé Théodore Ratisbonne said of his spiritual mother, “Here lays this sweet, strong Christian who, from the depths of her quiet, secluded home, has exercised more influence on the world of her time than will ever be known!” Yet in an era when women had few opportunities to excel or contribute to society outside the home, how did this brilliant and pious French mystic help re-Christianize France following the upheaval of the French Revolution?

In Louise Humann (1766–1836)—Re-Christianizing Post-Revolutionary France, author Margaret R. O’Leary provides a thorough and comprehensive English-language exploration of the history and life of a woman whose extraordinary intellectual prowess, range of thought, and curiosity helped assist a risky underground pastoral ministry during the French Revolution and rebuild the decimated Roman Catholic diocese of Mayence, France. From her early years as a youth receiving the daily light of God to the later development of her radical Christian philosophy—a philosophy that so confounded Pope Gregory XVI that he said she and her disciples had “sinned by an excess of faith”—the history of Louise Humann comes alive in detailed historical records, letters, and biographies.

Though an anachronism for her time—a woman with “the mind of a man and the capabilities of a scholar,” said one professor who knew her as a youth—the power of Louise Humann’s apostolate is central for understanding the direction and development of the Roman Catholic Church and the Congrégation de Notre Dame de Sion in the nineteenth century.

Margaret R. O’Leary, MD, graduate of the George Washington University Medical School in 1980 and one of the first residency-trained and board-certified emergency physicians in the United States, both practiced and taught emergency medicine and published in peer-reviewed journals and books during her distinguished medical career. She now enjoys writing in Kansas.