Sightseeing in the Undiscovered Country

Tales Retold by a Psychic Bystander™ 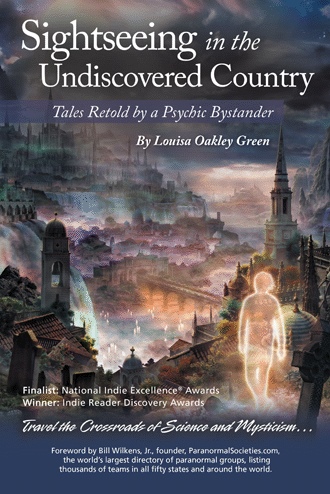 When Christine was a child living in Szczecin, Poland, she played the piano. Little did she know that someday that instrument would return to haunt her. When she was fourteen, her family moved to the United States and settled in Brooklyn, New York. She grew up, married, and had a family of her own.

“In August of 1979, my husband’s employer transferred him to a new location, so we moved from Brooklyn to Fairlawn, New Jersey,” Christine said.

During the month of August while the family was moving, Christine’s mother came to watch the children in the new home. When the task of packing and transferring boxes from New York to New Jersey was finally done, Christine’s mother, Maria, informed her that they had company in the house. She had heard a piano playing at night. Initially Maria assumed that since the windows were open, the melodic sounds were coming from another house on the block.

“Then she heard it in the middle of the night and realized it was coming from our house,” Christine said. What made this particularly strange was that there was no piano on the premises.

Their new home was a cheerful Cape Cod built in 1949, with two bedrooms upstairs and a bedroom, dining room, living room, and kitchen on the first floor. Christine and her husband slept in one bedroom upstairs and her daughter in the other. Her son slept in the downstairs bedroom.

The next person to hear the piano playing—the type of music that might be played in the background at a cocktail party—was Christine’s husband. “He said, ‘Isn’t it crazy that someone is playing the piano at eleven at night?’ He kept hearing it and then I heard it every so often.” When the autumn finally arrived with its chill winds, all the windows in the house were closed.

The piano played on.

“That’s when we knew, for certain, it was coming from our house,” she added. They noticed that the sounds were emanating from their dining room. When her husband took the screens down and replaced them with storm windows for the winter, he found that the old dining room screens were labeled “Music Room.”

“My son heard the piano a couple of times because his bedroom was on the first floor, so he asked that I always close his door and the dining room door at night,” she said. “Even my son’s friend, who stayed over a few times, heard it. He said, ‘You know what, I don’t want to stay over at your house anymore with a piano playing without a piano in the house.’” Soon, the tinkling of keys was not the only noise Christine heard.

“One night I was trying to fall asleep in my upstairs bedroom. It was dark, and I clearly heard the piano playing, and men and women talking downstairs. They sounded like people just having a good time.” She silently slid out of bed and, in bare feet, tiptoed downstairs and stood in the hallway next to the closed dining room door, listening. The piano continued to play and the din of the party-goers’ conversation, while unintelligible, could clearly be heard. She stood with her hand on the door knob. If she could quickly fling open the door, she thought, perhaps she might catch a glimpse of something.

“I opened the door and everything instantly stopped.” Why, she wondered, did the dining room—former music room—have so much activity? She would soon find out. Her nine-year-old son began studying for his church confirmation. His religious instructor had been friends with the son of the man who owned the house.

“He told us that every evening, his friend’s father would sit and play the piano. In the summer with the windows open, the sound would carry into the neighborhood. One hot day, the father was cutting the lawn, had a heart attack, and died on the property.”

Christine’s family lived in the house with the ghostly musician for more than twenty years. “He played every so often, not as frequently as in the beginning. I sprayed the room with holy water and prayed for his soul. He wasn’t scaring us. He just died on the property and stayed there.”

Perhaps in death, the man returned to what he had treasured most in life, the joy of music. 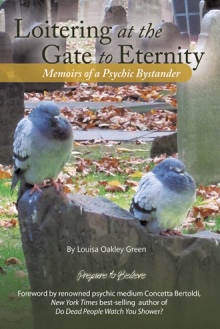 Loitering at the Gate to Eternity
Louisa Oakley Green
$16.95

“Get ready to slip on your psychic walking shoes and follow Louisa into the unseen world around us. Ramble through tales of dead relatives who insist on having the last annoying word, ghosts behaving badly, inspiring near-death experiences, and dreams foretelling the future. Along the way, you’ll find comfort, laughter, and some spine-tingling moments that may have you looking over your shoulder! A great guilty pleasure for those who love reading true paranormal tales.”

When Ronnie attempted suicide, his departed father rushed back to prevent it. Christine peered into her daughter’s room one day to discover her child’s invisible friend was real. Linda dreamed about a shoot-out at a local bar—and that may have been what saved her life the next day. This sequel to Loitering at the Gate to Eternity chronicles more than one hundred psychic tales from everyday people working in the fields of science, education, finance, entertainment, pastoral services, and more. It also highlights scientific studies into consciousness, near-death experiences, and reincarnation. When you finish reading this astonishing anthology, you may never view “reality” the same way again.

Louisa Oakley Green has worked as a newspaper reporter, public relations manager, and creative director. A University of South Carolina journalism graduate, Green also studied science for medical writing in New Jersey and traditional astrology in London. She previously published one other book, Loitering at the Gate to Eternity: Memoirs of a Psychic Bystander. Her work and interests maintain a curiosity-inspired balance between science and mysticism.