Effects of Human Behavior on the Life of Our Planet

Would the unexpected outcome be explained if we only knew all of the antecedent conditions and circumstances? Are we really free to choose, and if we cannot, is the future foreordained? Although these questions have been debated for millennia, as information accumulates concerning the origins of human behavior, that choice is an illusion becomes ever more plausible. Furthermore, its contraposition with determinism is a false dichotomy, i.e. absence of free will does not imply a predetermined future. There is too much indeterminacy built into the natural world, with humanity as a component, for our future to be cast in stone individually or collectively. The same uncertainties affecting human life apply to the matter and energy, of which all things are comprised. Although no organism is in control of its destiny, neither is that destiny foreordained. Alternative trajectories for life are not strict determinism and free will. Even if all uncertainties arising from antecedent events could be resolved by greater observational and reasoning power, the behavior of any organism at a given time and place is essentially unpredictable within certain ranges. Indeterminacy remains and, as far as we know, is a fundamental characteristic of nature, and everything that exists in its domain. The proposition that choice is illusory may be wrong, but it has the potential to vastly improve the landscape on Earth. If accepted, even tentatively, it would lead to a number of healthy developments. For one thing, we would function with humility rather than pomposity, and perhaps forever relinquish claim to hegemony over other forms of life that has been so destructive of our fellow Earth-mates and the planet in general. Secondly, it would discourage the practice of blaming and praising - manipulative devices intended to coerce vulnerable souls to do another’s bidding - and acknowledge that no one can fundamentally be held accountable for anything. We would be more prone to respond objectively to threats, without absolving anyone of the responsibility to do the right thing. Menaces to society could be dealt with, even harshly, not from malice, hatred or vengeance, but to allow for orderly societal functioning and progress. 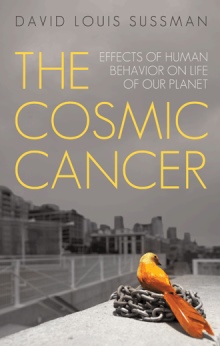 Planet Earth continues to creep to the edge of an abyss, and we have no one to blame but ourselves. As we’ve evolved, we’ve engaged in egregious behaviors without thinking about the consequences. Whether it’s reproducing in large numbers, killing off other species or exploiting natural resources, we’ve failed to consider the impact of our actions. David Louis Sussman, a lifelong environmentalist, examines our missteps and suggests how we might alter our approach to boost the chances for survival for ourselves and other living things. He explores topics such as: • free will and how it can be a polarizing force; • sexual repression and its destabilizing consequences; • missteps by religious leaders and politicians; • structuring democracy on the basis of rights rather than responsibilities. The rate of extinction of other species is now greater than it has been since the disappearance of the dinosaurs 60 million years ago. There is little doubt that we are the culprits, and we could be next. Our collective decisions have brought about colossal changes in the planet we inherited, and we need to act now to provide future generations with a fighting chance of defeating The Cosmic Cancer.

David Louis Sussman is a professional engineer and was a college professor, dividing his teaching time with consulting and conducting seminars for industries in many developing countries. He has presented to student and civic groups on the adverse effects of excessive human population, and has supported local environmental initiatives. He lives in New Hampshire, with his wife Claire.