Genocide of the Irish 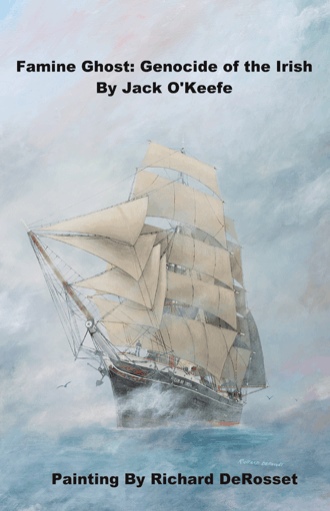 From his parents’ cottage, Johnjoe Kevane saw them come with the dawn, the fog drifting up from Dingle Bay a mile away and clinging to Conor Pass above. Six mounted dragoons, wearing their scarlet short-tailed jackets in service to the Crown, rode up to the Kevane cottage in Ballyristeen, two miles north of Dingle, which jutted out into the Atlantic like a large bumpy finger. Each soldier carried across his shoulders a bayonet-fitted musket called a “dragon” because it “breathed fire” when shot. Captain Patrick Packenham with his five soldiers was to preside over the destruction of another farmer’s cottage. Trailing the soldiers like stray puppies this day was Bailiff Sheedy, the landlord’s gombeen man or rent collector, who preyed upon the poor. The bailiff conscripted two townspeople, “Irish destructives,” the villagers called them. Armed with crowbars and sledgehammers, they wouldn’t look the Kevanes in the eye. They would do the dirty work, and looked the part, dressed in patched farmer’s clothes, a contrast to the spit and polish of the English dragoons whom they knew despised them for their poverty. The bailiff strode to the door of the thatched whitewashed cottage and pounded on it with his fist. “Now, John, Mary, ‘tis time. I warned ye.” Two days before, the bailiff told John Kevane: “What the devil do we care about you or your black potatoes. It was not us that made them black. You will get two days to pay the rent, and if you don’t, you know the consequences.” This morning the consequences were arriving. 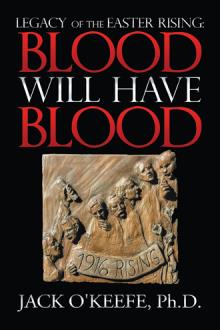 Famine Ghost is a book of historical fiction, the story of the Irish Famine (1845-1850) as seen through the eyes of young Johnjoe Kevane. He and his family are evicted from their cottage in Dingle. Disdaining the option of life in the local workhouse, the Kevanes sail in a coffin ship to Grosse Ile in Canada. Johnjoe keeps a diary of his family’s suffering in the dark bowels of the overcrowded ship. When his parents die of ship fever—typhus—Johnjoe returns home to exact revenge on the landlord, Major Mahon.

“O’Keefe has delicately balanced history with touching humanity and humor. He has provided readers with a vivid tale, surprising in all the right ways, and an unabashed glimpse into the shocking truth of the Irish Famine. A masterful read cover to cover.” --Sara Wolski, literary agent

“Famine Ghost captures the realities of the 1845-1850 Great Irish Famine and is filled with valuable research on the tragedy. An imaginative and thoughtful author, O’Keefe has a real gift for the dialog and pace of language of 19th century Ireland. His vivid portrayal and historical perspective bring the hardships of Ireland’s troubles to our awareness in the 21st century, like no other book.” --Helen Gallagher, Computer Clarity, www.cclarity.com

Jack O'Keefe is a college teacher of English with a doctorate in English Literature from Loyola University. He has also studied at the University of Iowa's Writer's Workshop.

The son of Irish immigrants, O'Keefe became interested in Irish history through his family.

O'Keefe, his wife, and three sons live in Chicago where he teaches at City Colleges.