STEPPIN’ OUT TALES FROM THE TRAIL

A BOOK OF ORAL POETRY 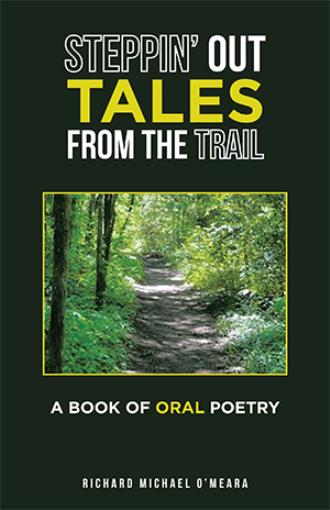 KIRKUS REVIEW These collected poems trace a soldier’s lifetime journey and his experiences of peace and war. O’Meara has written both fiction and nonfiction. This is his first book of poetry, arranged in roughly chronological order from childhood and adolescence to young manhood during the Vietnam War era and reflective later years. Besides movement along a timeline, the poems also track the speaker’s path to self-understanding, as mapped in the opening piece, “Starting Out.” This is a concrete poem whose diamond shape echoes the speaker’s ballooning self-importance —his “place in the history / of things”—that then narrows to a wiser humility: “Surprise, it was / never ’bout / me.” O’Meara’s voice is flexible, sometimes solemn, sometimes casual, as in “Michael,” set in the midst of the Vietnam War: “When I came back / Michael had been dead six months. / There were bands / playin’ in Central Park; / Jesus freaks were lovin’, / all the world was carin’.” The bright scene, the lines’ musical lilt, and the speaker’s slangy voice make a powerful ironic contrast with the poem’s bitter reflections, nicely capturing the speaker’s feelings of loss and anomie. Overall, the poems emphasize the pathos behind even the best memories, because their reality fades: “ ’Course all them ghosts, / the moms ’n dads, / the kids ’n friends, / they wander off.” On some occasions the poems can become sentimental, as in “For a Soldier”: “Remember him, / For, if he could, / His gaze would reach across the shores / And melt into your heart.” This idealized figure bears little relationship to the more authentic, badly frightened young soldier in “Nuts,” “who said / Cuttin’ ears… / was the way to go.” Intriguing poems about history and a warrior’s trajectory with a strong sense of pathos.

Richard Michael O’Meara is a retired soldier and trial attorney who lives with his wife, Mary, on an island in southern New Jersey.