A Robert Parry Reader With a foreword by Diane Duston; Edited and with an afterword by Nat Parry 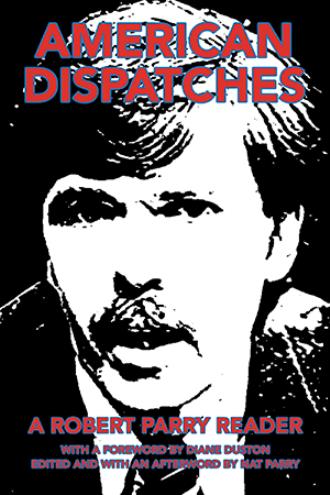 Often going against the grain of Washington’s so-called conventional wisdom, Robert Parry covered the most consequential issues facing the country during his five decades as a journalist – from the Vietnam War to Iran-Contra to the Iraq War to Russiagate, stories that shaped the course of contemporary American history. A finalist for the Pulitzer Prize in 1985 and the recipient of numerous awards – including the George Polk Award for National Reporting in 1984, I.F. Stone Medal for Journalistic Independence in 2015, and the Martha Gellhorn Prize for Journalism in 2017 – Parry earned a reputation as a tenacious reporter committed to telling the truth without fear or favor. This compilation of Parry’s writings traces his development from a student activist to a beat reporter to an investigative journalist and historian, shedding light on how he came to believe that the Washington press corps had lost its way and that building independent media is essential to save the republic. More than a simple collection of articles by an iconoclastic journalist, however, this volume is an illuminating history of the late 20th and early 21st centuries – a troubling recent past that Parry meticulously chronicles through in-depth research and compelling storytelling. What will come into focus as the reader turns these pages is an at times shocking level of corruption and wrongdoing at the highest levels of government, enabled by a steady deterioration of the U.S. media’s commitment to providing an honest accounting of the events shaping our world. The reader, perhaps, will come to the same conclusions that Robert Parry did: that the media has become a threat to democracy and one of the most important tasks that exists today is to build a new infrastructure for conveying information – one that is honest, independent, and incorruptible.

After breaking many of the Iran-Contra Affair stories while working at The Associated Press and Newsweek in the 1980s, Parry went on to become a pioneer in online journalism when he launched Consortium News in 1995. During his career, Parry reported from Grenada, El Salvador, Nicaragua, Iran, Israel and Haiti. He worked for Bloomberg News from 2000-2004 and taught at the New York University Graduate School of Journalism. He received the George Polk Award for National Reporting in 1984, The Associated Press Managing Editors Association Award in 1985 for Top AP Reportorial Performance, the I.F. Stone Medal for Journalistic Independence in 2015, and the Martha Gellhorn Prize for Journalism in 2017. He was also a finalist for the Pulitzer Prize in 1985.

Before passing away in 2018, he published several books, including Fooling America: How Washington Insiders Twist the Truth and Manufacture the Conventional Wisdom (1992), Trick or Treason: The October Surprise Mystery (1993), The October Surprise X-Files: The Hidden Origins of the Reagan-Bush Era (1996), Lost History: Contras, Cocaine, the Press & ‘Project Truth’ (1999), Secrecy & Privilege: Rise of the Bush Dynasty from Watergate to Iraq (2004), Neck Deep: The Disastrous Presidency of George W. Bush (2007), and America's Stolen Narrative: From Washington and Madison to Nixon, Reagan and the Bushes to Obama (2012).