The Puzzle of A Twin Paradox 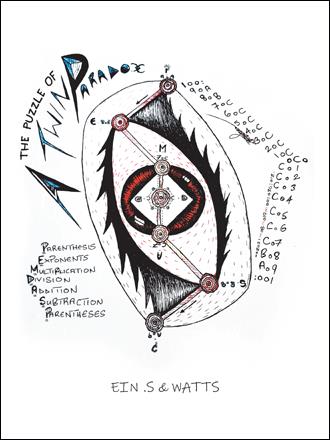 Two young men; an Artist and an Author, began The Puzzle of A Twin Paradox by introducing their talents to one another. The Artist displayed his musical talents and The Author listened, but when The Author displayed his writing talents, the two individuals were absorbed into the story he wrote, which turned out to be the same story the readers were reading.

After being absorbed into the story, the two boys woke up in an underground library having no memory of who they were or how they got there. All they knew was that they looked alike, so they named one another and from then on they addressed each other as brother.

The two brother's, Seth and Aiden, climbed to the surface together and in the midday sun they found that they were supposedly on an empty island. They thoroughly searched the island for hours and eerily found no other signs of life.

Seth became bored during the searching process and requested a little entertainment from his brother, Aiden. Seeing that both boys were starting from a blank slate, Aiden said that he couldn't recap a tale because he knew no other story but the one they were living. However, to keep his brother's spirit up, he began to foreshadow the possibility of a boy that can wield lightning to fight against monsters. He titled the boy, an Alpha and he called the monsters, the Organisms.

The narrative that Aiden had began, kept his brother focused, happy, and entertained while they searched for signs of life or an exit.

After the sun sat the two decided to rest on the beach and continue the next morning. But when the moon rose, the narrative showed signs of coming to life around the brothers when they were targeted by the terrifying Organisms.

Will they remember who they are in time to escape the story that trapped them inside of it? Or is it deeper than they think and they're not inside a story at all?

Discovering his writing skills at Seventeen years old was the beginning of Dumah Brown's Journey in his pursuit of Authorship. Mr. Brown was asked by his high school teacher Ms. D. Evans to write a short story in April 2014 or he would fail his English Language class and risk not graduating. Never thinking to write a story before, he turned to the tone of his recently developed loved for orchestral trailer music, and produced his first story called, "A House on The Block." Gaining an A+ for his creativity implanted into the Mystery/Horror mix and also transient popularity among the student body for his piece of art, inspired him to carry it further. For Seven years Dumah Brown's been developing his skills across three unpublished novels until he'd finally stumped into creating the masterpiece he wished to be his debut release; "A Twin Paradox."