How We Managed A Trio Of Business Ventures 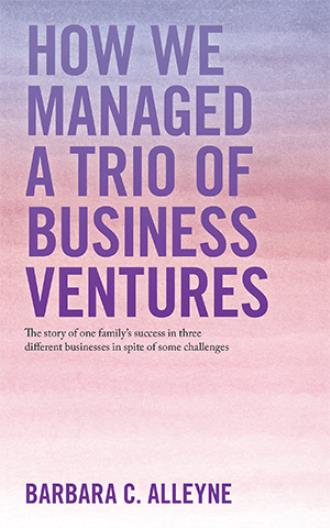 The three business ventures featured in the book shows the steps one family took to develop each business. It shows how they achieved success while tackling and overcoming some challenges that arose from time to time. The first venture, a video rental store was started in the late 1980s at the height of the movie rental industry. It shows how the family meticulously implemented complimentary activities to bolster their success in a highly competitive industry. The second venture, a Caribbean gourmet deli restaurant, showcases the family’s awareness in catering to and satisfying their customers while enhancing the business by extending their menu beyond Caribbean dishes. The third venture deals with some of the complexities they encounter in the landlord tenant relations.

Barbara Alleyne was born and raised in the Island of Barbados, British West Indies. One of seven children, she had an early exposure to entrepreneurship when her father who was a Police Sergeant in the Barbados Police Force would plant and cultivate a variety of vegetables on his days off from work. She and her older siblings had to assist their mother with the task of pumping water from the family’s well to water rows of carrots, beets, cabbages, cherry tomatoes, string beans, and lettuce on their mini farm. Eventually, her father bought a windmill and rotating pipes to lighten the task of having to pump water from the well every day. Some of the vegetables were sold to market vendors that came to the family’s home. Besides the vegetables, her mother had a small variety shop next to the family’s main home. Barbara would help in the shop when she was on vacation from school. Barbara attended private elementary and secondary schools. After graduating from high school, her father wanted her to pursue a career in nursing just like her eldest sister who worked as a nurse at the Barbados General Hospital prior to migrating to the United States in 1955 to advance her nursing career. Barbara was not interested in becoming a nurse. Instead, she got a job as a statistics clerk with the Barbados City government, working in the mayor’s office. After two years with the City Government, she was invited to join her sister in the United States. Once again, her father suggested that she should consider nursing as a career. Her sister tried to persuade her. However, Barbara preferred to pursue a career as a secretary. While in the States her sister got her enrolled in a business school in New York City. She studied shorthand and typing for several months and eventually received a business certificate. After receiving her permanent residency, she got a job as a secretary at the YMCA Headquarters in New York City working for the executive in charge of development and fundraising. Her secretarial responsibilities included taking minutes for the weekly board meetings. She also had the responsibility of compiling annual membership reports for several branches of the organization. Although her position entailed a significant amount of philanthropic work which Barbara enjoyed, the organization did not offer tuition refund for college. Barbara wanted to advance her education to get a college degree. To this end, she applied for a position with the Ford Foundation in New York City since the Foundation offered 100 percent reimbursement for college. Additionally, the Foundation also offered a significantly higher pay and a wider range of benefits including free medical, four weeks’ vacation profit sharing, etc. She accepted a position at the Foundation as an administrative assistant in the office of Program Related Investments. She said that working at the Ford Foundation was one of the most pleasant job experiences she had. Barbara completed both her AA and BA degrees while going to college at night and some weekends. During the mid-1970s just before the end of the Vietnam War the country was in a recession. The Foundation was one of the companies that was affected by that event. The consequence was retrenchment. To counteract the possibility of job insecurity, she sought and accepted a more secure position as an administrative secretary at the Texaco Oil Company headquarters which at the time was in the Chrysler Building in Manhattan. The company was in the process of relocating to a new facility in Harrison, a suburban town in Westchester County, New York. After working as an administrative secretary for several years she was promoted to a position as a Contributions Assistant in the company’s Public Relations Department. In this position Barbara reviewed and did write ups on applications that were submitted to the company for grants. These write ups were then discussed at weekly meetings to determine which applicants should receive a grant. Barbara also worked with the company’s scholarship program which offered over 300 scholarships to eligible employee’s children. Over a period of several years, Barbara volunteered to work with various community outreach programs that the company supported. These included United Way Campaign and Blood Drives. She also served as President of the Texaco Forum, a women’s group that also supported some of these programs. Her husband also worked for Texaco as a Graphic Designer. She has one son who works for the U.S. government as an air safety investigator.