Tales of the Elder Statesman 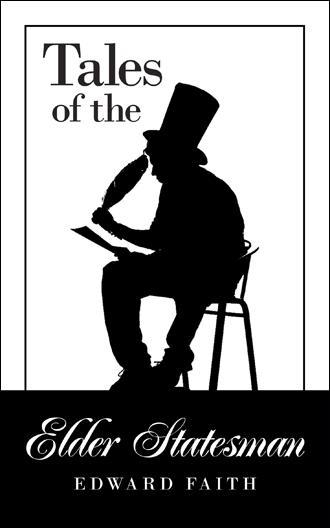 In and around Rough Edge (The western side of the village of St. Stephens, Alabama) several crusty old gentlemen lived.  In his young days Edward was often enthralled by the tales these old men told.

Over the years many tales accumulated in his repertory.  Edward often regaled gatherings of the good people of St. Stephens with those stories.  He was told  by many, “you should write a book containing these stories.”

In considering writing a book of anecdotes Edward chose, “Tales of the Elder Statesman,” as the title.  One of the old men who spun many of the stories considered himself to be an authority on Washington County politics.  In reality just the opposite was true.  If you wanted to vote for a winning candidate, vote against the person Rufus was backing.  In jest Edward began calling him the Elder Statesman.

In the book the stories of several crabby old men are recorded and the term, “The Elder Statesman” is used to refer to each of these old men.  Thus, The Elder Statesman,” applies to a number of different men.  It  became a compilation of all those different personalities.

Most of the stories are humorous, some are heartwarming morality revelations, while a few are pure fiction.  The real beauty of, “Tales of the Elder Statesman”, lies in the fact that the reader does not have to keep up with a complicated plot.  He can read a few tales, put the book down for a week then read some more tales without missing a beat.

Edward Faith is a retired employee of a large chemical company and currently lives in St. Stephens, Alabama.  Edward graduated from Mississippi State University in 1964 with a BS in Geography.  After retiring in 1992, he enjoyed tutoring students in algebra.  Through the years he has served on the Washington County Hospital Board, on the St. Stephens Historical Commission, on the Board of Directors of the St. Stephens Water System and on the Board of Directors of the St. Stephens Nutrition Center.  From the many experiences with people through the years, Edward was encouraged by friends to record numerous anecdotes in a book.  The result is, “Tales of the Elder Statesman.”