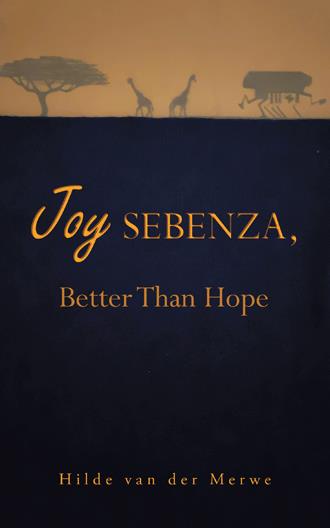 In a unique and utopian South Africa of the far future, a secret agent crosses paths with a doomed man, a few adventurous children, and a unit of nurses. He also meets a murdered woman, which is highly unusual since crime is just about unheard off in the Age of Integrity. To a background of wild South African landscapes and phenomenal technology, investigations continue. However, it is not the agent but the nurses who get to have most of the adventures. But will they uncover the truth about the dead woman? And will they discover the identities of the two John Does, lying unconscious in their hospital? Joy Sebenza, Better Than Hope, is a utopian sci fi drama, sleuth detective adventure, with hints of romance and a sprinkle of fairy tale flavor, but most of all, it is an origin story.

Hilde van der Merwe was born in South Africa, and lived there until she left with a six-month-old baby, two cats and three suitcases. As a child she played stories, and as a teen and adult she often went backpacking. Once, by accident, she swam with sharks.