The Gold of St. Croix 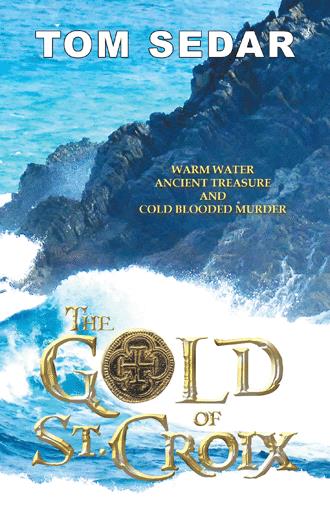 Retired Homicide Detective Mad Dog Cotton has a reputation on St. Croix. He can find missing things, and Betsy Rourk’s husband is missing. When Betsy asks Mad Dog to find her husband, Mad Dog says, “no.”
When Betsy offers a single golden piece of Pirate Treasure, common sense is abandoned and he says, “yes.”
There was no way Mad Dog could have known he was walking into a 400-year-old Caribbean mystery. A mystery where the ancient ghosts of greed, lust and insanity would rip a gaping hole in his tranquil island existence and threaten to destroy everyone he loves.

Maybe it would be better if Mad Dog told you about this mess.

I am a simple guy, give me little slice of paradise, a nice cold beer, let me put my feet up on the back deck of my boat, and I’m happy.  Sure, I do a little Private Detective work for my friends, but I don’t like action or adventure anymore.

My wife Cheri, a retired Federal Marshal, would say, “because you’re a dumb ass.”

Cheri’s ex-partner at the Marshal Service, a gentle giant named John Canfield, would just shake his head and maybe laugh at me.

It’s ok, I know I’m a dumb ass, a greedy dumb ass. I can tell you straight up, if I would have known that only hours after I took that gold coin from Betsy, everyone I saw or talked to would be targeted for murder by a sociopathic serial killer even I would have said, “NO.”

I am opposed to sociopaths making it their fulltime job to murder me and everyone around me. I don’t think they understand, I’m a nice quiet guy, but if you threaten my wife and friends, I will hunt you to the end of the universe!

The Gold of St. Croix is a fast-paced Caribbean action thriller where the opposites of murder and paradise collide.

The Gold of St. Croix is the first in Tom Sedar’s new detective series about Mad Dog Cotton and an assortment of island characters as they investigate murder in paradise. Tom’s years as a homicide prosecutor in St. Croix lend his writing a refreshing and chilling sense of reality.

Wyoming native Tom Sedar’s life has been a fun ride. As a young man he worked as a ranch hand, rodeo cowboy, rough neck, and commercial diver. In 1984 Tom quit his wondering life to attend Law School at the University of Wyoming. After Law School he had a 25-year career as a trial lawyer. In his career Tom tried over 250 jury trials (that is a lot of storytelling). In 2007 Tom and his wife Charlene, a Federal Marshal, moved to the Caribbean where Tom was the Major Crimes / Homicide Prosecutor for the Island of St. Croix. In, The Gold of St. Croix, Tom couples his lifetime of experience with his gift for storytelling to create a must read for any mystery lover.