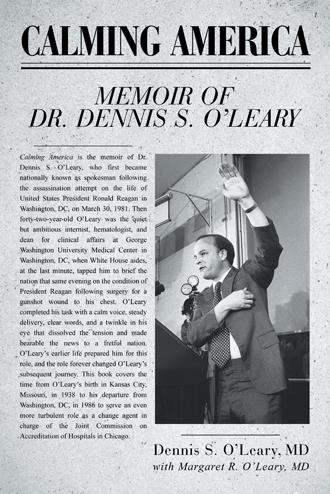 I never planned to write my memoir. My basic life philosophy is “Dust to dust”—that is, one is born, lives one’s life, and then dies generally forgotten. Thus, the idea of writing a memoir remained low on my priority list until I began to reflect on my life adventures and the times in which I have lived. It seemed, I realized, that my experiences, observations, and insights might be worth documenting for future generations interested in the histories of American presidents, academic medical centers, emergency medicine and trauma care, health care politics, and the interface between medicine and the media during the second half of the twentieth century.

Getting started was the easy part. Getting to the finish line was quite another story. Fortunately, my wife Margaret is an established nonfiction author, and we had written together professionally as a team during the previous four decades. So one day we sat down with a tape recorder and a box of cassettes, and she started the painstaking process of extracting from me the details of my personal history. That effort basically gave us a skeleton on which to drape the stories, life experiences, and a continuous narrative from my ancestors through the conclusion of my tenure in Washington, DC, in 1986. This effort was made possible by our collection over time of voluminous primary source materials, which we had somehow kept together—in no particular order—through our moves from Washington, DC, to Chicago and, finally, to Kansas City, where we now live. Organizing the primary source materials and integrating them, as appropriate, into the text was a laborious task, but after eighteen months of hard work, we completed the manuscript and also produced the Dr. Dennis S. O’Leary Archive.

The centerpiece story in this book concerns the part I played as the main hospital spokesman during the thirteen-day hospitalization of the United States president, Ronald Wilson Reagan, at George Washington University Hospital following the shooting attempt on his life in Washington, DC, on March 30, 1981. This story is mostly told as a firsthand narrative interwoven with separate primary source materials researched and organized by my wife. These materials include public transcripts of press briefings, media reports, letters from the public, testimonies, and excerpts from President Reagan’s diary, which together provide immediacy, transparency, and historical perspective to the rapidly unfolding events of those thirteen days. My press briefings and media reports were upbeat while also being clinically honest. Most importantly, President Reagan left our hospital in good condition and well on his way to a full recovery.

This book also tells the story of the George Washington University Medical Center’s tumultuous evolution from being the last academic medical center in the United States to have full-time academic faculty physicians, to becoming a leading academic institution in the fifteen short years leading up to President Reagan’s hospitalization with us in March and April of 1981. It also details the elaboration of the medical center’s emergency and trauma-care capabilities from a rudimentary state to being the best in Washington, DC. My wife’s knowledge and experience as a board-certified emergency physician who trained in emergency medicine and trauma care at George Washington University Hospital, Georgetown University Hospital, and the Maryland Shock Trauma Center in Baltimore were especially helpful in describing this latter evolution.

One never knows whether one will have life opportunities to play vital roles in events such as those framed above and, if afforded such opportunities, whether one will comport oneself well. I was lucky to have had these opportunities but fortunate as well to have had ongoing life experiences that molded me into the person I eventually became. In some instances, I was in the right place at the right time and capitalized on the opportunity, while in others, I took chances and ran against the tide of my peer group. This continuous shaping of my persona—described through much of this memoir—transformed me from a painfully shy high school student to the confident public speaker I became.

In most cases, no test exists to determine whether the transformation was successful. As it turned out, I was tested repeatedly, but the biggest test of all happened when I suddenly found myself center stage as George Washington University Hospital spokesman and de facto White House spokesman following the attempted assassination of President Ronald Reagan. To glean an understanding of what was expected of me, we open this book with the attempted assassination of President Ronald Reagan and the related events that led to my being thrust into the spokesman role.

This memoir, as well as the notes that further describe individuals mentioned in the text, describes only half my professional career. Beginning in 1986, I went on to serve twenty-one years as president of the Joint Commission, the predominant health-care accrediting body in the world. My experiences as spokesman during President Reagan’s hospitalization at George Washington University School of Medicine and as president of the Medical Society of the District of Columbia were mild compared to the complex, roiling environment I encountered at the national and international health-care levels. That is a pretty good story too, but we are going to rest a little while before starting the second memoir.

The information void in the hours following the shooting of US President Ronald Reagan late Monday afternoon, March 30, 1981, spawned many false rumors and misinformation, which White House political adviser Lyn Nofziger understood threatened the credibility of the White House. He therefore took the podium before the 200 plus assembled press in Ross Hall to tell them that he would be bringing with him a credible physician to brief them once the president was out of surgery.

However, he didn’t have many options to draw from for that credible physician. At the hospital, the surgeons tending the three shooting victims had first-hand information about the afternoon’s events, but each surgeon knew only about his own injured patient. White House physician Dan Ruge meanwhile had been at the president’s side throughout the afternoon and was a possible candidate, but his White House association made his credibility suspect according to White House aides.

The job became the drafting of the most logical person to be spokesman. That would have been the seasoned physician CEO of the George Washington University Medical Center Ron Kaufman, but he was out of town. Next up was Dennis O’Leary, the physician dean for clinical affairs, as the preferred spokesman.

To the White House, O’Leary was a total unknown, but a review of his credentials would hardly have been reassuring. He had originally been recruited to George Washington University as a blood specialist. Reticent by nature, he had minimal public-relations and public-speaking experience, save two years as a member of his hometown high school debate team. He had no surgical or trauma training or experience.

But beggars can’t be choosers, as the saying goes. Kindly stated, O’Leary was probably the least bad choice to serve as White House/hospital spokesman to inform the world of the status of the wounded President Reagan, special agent Tim McCarthy, and press secretary Jim Brady. Yet, with a little bit of luck, it might all work out. And it did.

Margaret R. O’Leary, MD, one of the first residency-

trained and board-certified emergency physicians in the US, has combined emergency medicine and publishing careers for four decades. Today Margaret enjoys reading, writing, and gardening.