The Adventures of Plimoth Plantation

As Told by the Mayflower Mouse 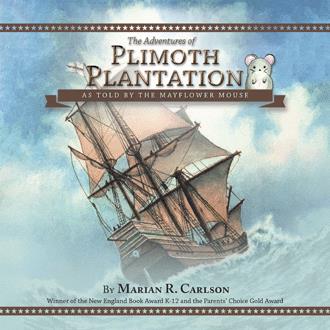 This book offers a fresh and engaging perspective on one of the most pivotal events in America’s history. It provides young readers with a deeper understanding of how the Pilgrims’ strength, tenacity and faith-filled perseverance not only led them to success in their own pursuit of a better life but also shaped the core values of America. Through delightful narration, vibrant illustrations and excerpts from real historical documents, children can form a deeper appreciation of how the Pilgrims’ sacrifices paved the way to a nation built on the spirit of freedom and fearlessness.  The use of passages from the journal of William Bradford ignites a love of history early on, demonstrates the value of journal-keeping, and encourages young readers to research their unique family histories and document their findings as they embark on unique adventures of their own.

Marian “Hannah” Carlson has won the New England Book Award for K–12 and the Parents’ Choice Gold Award for John Adams: The Voice Heard ‘Round the World. The book was set to music by the Boston Landmarks Orchestra’s original score and narrated by Pulitzer Prize winner David McCullough on CD. Her other books include American Genius: Henry Wadsworth Longfellow, Great American Writers, and Yankee Doodle’s Pen.

A writer and educator, Mrs. Carlson has had a busy and varied career. As a former syndicated newspaper columnist, she wrote articles for parents about education in the home. As a public school teacher in Lexington and Brookline, Massachusetts, her programs for middle school students received special recognition from the Harvard Graduate School of Education. She has received grants from the National Endowment for the Arts, PBS, and others to write educational programs.

She and her husband, Steve, live in Chatham near the “turn around” of the Mayflower. They have three children and six grandchildren. During the research for this book, they learned that their youngest son married a direct descendent of the Mayflower Pilgrims. Their twelve-year-old granddaughter, Emma, an avid art student, illustrated the vignettes for this book.

Emma Wildfeuer is a California-based young illustrator. She loves art, musical theater, and exploring the outdoors with her family. In addition, she loves traveling, photography, and reading.