Commentaries on the Global Events of 2019—Volume XV 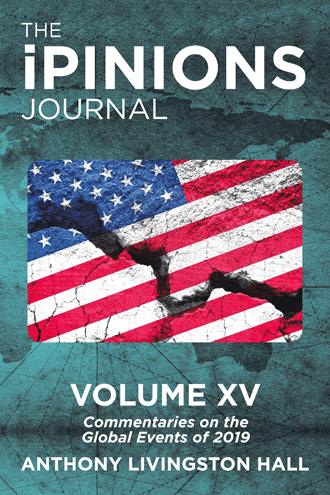 ‘Putin Told Me,’ Said Trump, His ‘Useful Idiot.’ Donald Trump was inaugurated as the 45th president of the United States on January 20, 2017. Mere weeks later, Russian President Vladimir Putin was already deflecting blame for interfering in the 2016 presidential campaign to help elect Trump. Specifically, during a joint press conference with Hungarian President Viktor Orban, a reporter asked Putin about Russia’s involvement in the conflict raging in the Dunbass region of Ukraine. Putin not only deflected (and projected), but betrayed consciousness of guilt with this non-sequitur: As we all know, during the presidential campaign in the United States, the Ukrainian government adopted a unilateral position in favour of one candidate. More than that, certain oligarchs, certainly with the approval of the political leadership, funded this candidate, or female candidate, to be more precise. (Kremlin.ru, February 2, 2017) But Putin was only deflecting the way Russians are trained to do: Moscow has long used its intelligence agencies and propaganda machine to muddy the waters of public debate, casting doubts over established facts. Russia [has a] pattern of trying to blame other countries for its own actions, like the attempted poisoning last year of a former Russian intelligence officer or the downing of a passenger jet over Ukraine in 2014. (The New York Times, November 11, 2019) No doubt Putin is intimately familiar with every tidbit of “kompromat” his intelligence agencies gathered over years, if not decades, on Trump. Therefore, he would’ve known all too well how to stroke Trump’s fragile ego or provoke his manifest insecurities. They have had several one-on-one meetings over the past three years. And, by barring all US officials from them, Trump made each one suspicious. But one could well imagine Putin seizing every opportunity to play Trump with even greater deft than Iago played Othello. That’s why nobody should have been surprised by this: One former senior White House official said President Trump even stated so explicitly at one point, saying he knew Ukraine was the real culprit because ‘Putin told me.’ (The Washington Post, December 20, 2019) Not to mention this open and notorious way Putin got Trump to parrot Russia’s propaganda on Ukraine: At a joint press conference after one-on-one talks lasting more than two hours in the Finnish capital, the US president offered no criticism of Putin or the cyber-attacks that the US intelligence community says he coordinated to help Trump’s 2016 election campaign. ‘They said they think it’s Russia; I have President Putin, he just said it’s not Russia,’ Trump told reporters. ‘I will say this: I don’t see any reason why it would be [Russia].’ (The Guardian, July 16, 2018) But nothing betrays what compromising information Putin must have on Trump quite like Russian pundits now openly mocking him like this on State TV: As Russian Foreign Minister Sergey Lavrov returned home from his visit with President Donald Trump in the Oval Office last week[,] Rossiya 1 aired a segment entitled ‘Puppet Master and ‘Agent’—How to Understand Lavrov’s Meeting With Trump.’… And in the meantime, much to Russia’s satisfaction, Ukrainian President Volodymyr Zelensky is still waiting for that critical White House meeting with the American president: the famous ‘quid pro quo’ for Zelensky announcing an investigation that would smear Democratic challenger Joe Biden. (The Daily Beast, December 16, 2019) In fact, Russians see Trump as such a laughingstock, they now joke that Putin will have to grant him asylum when he leaves the White House (a la Edward Snowden). And why not; after all, Russia has never had a more “useful idiot.” Putin can be forgiven his Cheshire-Cat grin whenever he talks about Trump. But, with all due respect to his puppetry, most Russians can’t believe their dumb luck. Because not even Putin could have anticipated that Trump would enlist so many other useful idiots to parrot Russia’s propaganda and do its bidding. [In testifying before the House impeachment inquiry Thursday, former White House adviser Fiona Hill] admonished [Republican] lawmakers for promoting a ‘fictional narrative’ that it was Ukraine—not Russia—that interfered in the 2016 presidential election. ‘In the course of this investigation, I would ask that you please not promote politically driven falsehoods that so clearly advance Russian interests,’ she said. (USA Today, November 21, 2019) Frankly, listening to Republicans these days, you’d be forgiven for thinking they’re vying to please Putin as much as Trump. 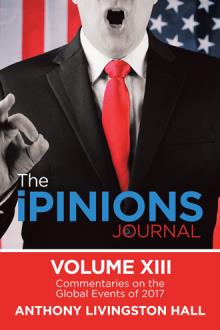 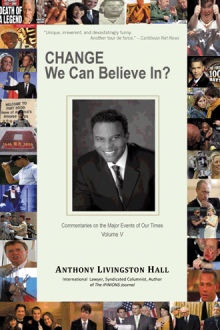 Change We Can Believe In?
Anthony Livingston Hall
$24.95 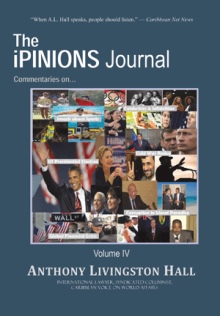 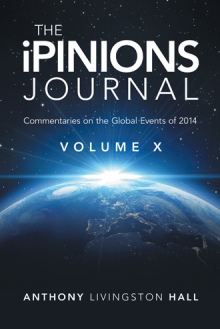 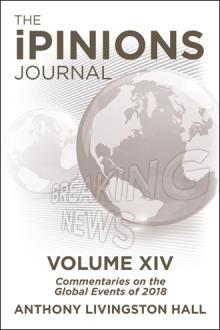 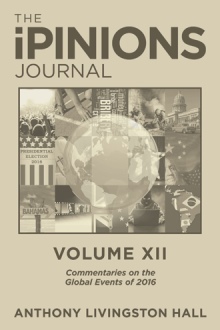 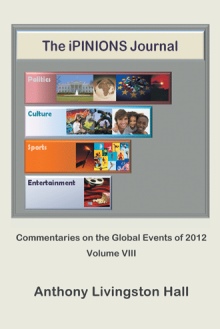 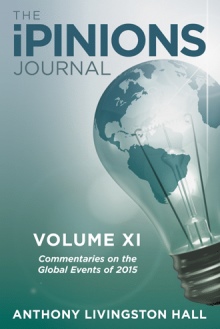 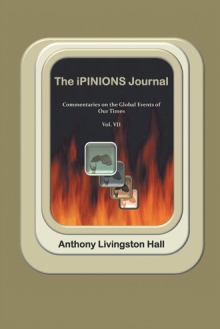 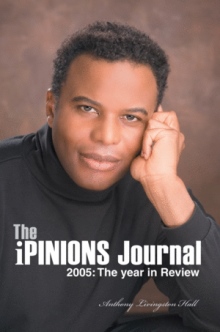 ANTHONY L. HALL takes aim at the global events of 2019 with a unique and refreshing perspective. Some of the topics in this volume include: Republicans and Democrats aping Sunnis and Shias “Even if Democrats impeach Trump in Congress or defeat him at the polls, his presidency has already sown seeds of division and dysfunction that could harvest political thorns for a thousand years.” Social networks abolishing ‘Likes’ “They can’t quit likes. Because networks are as hooked on the money likes generate as users are on the high they stimulate.” Colin Kaepernick moving NFL tryout and making new demands “Kaepernick must think he’s Trump and the NFL the Republican Party. Because only delusions of grandeur on that scale explains him thinking he can play the NFL like this.” White evangelical Christians supporting Trump “The hypocrisy inherent in them showing abject loyalty to this two-legged golden calf is almost too contemptible for words. Suffice it to know that a skunk has more regard for a garden party than Trump has for a house of worship.” Hong Kongers protesting Chinese rule “These protests amount to nothing more than a self-hating, Stockholm Syndrome-like preference for the British over the Chinese. Hong Kongers don’t want democracy so much as a return to British colonial rule.” MTV trying to whitewash Michael Jackson’s name from VMAs “Frankly, his pedophile exploits were such that MTV paying any homage to him is tantamount to Jello paying homage to Bill Cosby.” Rich parents offering bribes to get their kids into elite colleges “The real indictment is that, despite all the resources at their disposal, these parents raised such dumb, lazy, and untalented kids.” Failure of latest US-North Korea nuclear summit “While Trump flew off to take a cold shower back in America, Kim was smoking a cigarette and planning sightseeing tours around Vietnam. So who do you think is zooming who in their “brokeback” bromance…?”

Anthony L. Hall is a Washington-based lawyer who is licensed to practice in a number of foreign jurisdictions. He hails from The Bahamas and Turks & Caicos Islands and was educated at some of America’s best schools, including Williams College. Hall is also a syndicated columnist and author of The iPINIONS Journal, a weblog of enlightening and entertaining commentaries that provide a refreshing take on current events. He lives in Arlington, Virginia. http://ipjn.com