A Green Light for Mom

A Boy’s Journey through a Deployment 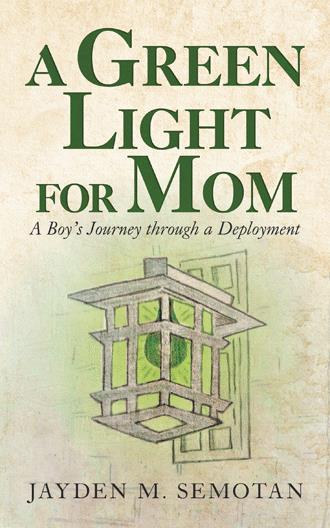 On April 1, 2017 my life changed. I got told that my Mom was going into deployment. I felt like crying. I was so sad because she would be gone for over six months. The first questions I asked her were: • “Are you going to war?” • “Are you going to die? • “Do you get guns?” • “When will it start?” • “Who will do everything that you do, Mom?” My Mom told me that it will be OK and that she was going to support the war. She wouldn’t die because she was too smart and she was getting guns so that made me feel better. She told me her deployment would start around January, 2018 and she was going to someplace in the Middle East (Qatar). Also, she said that Dad was going to try to do everything she used to do but I had to be a big boy and do some stuff to help too. On Monday night, Mom told me that she had told my principal and teacher at school about the deployment. This made me feel better at first because if I got sad they would be there to help me. But the day after that I felt different. I didn’t want my Mom to tell anyone else because I wanted it to be our little secret. I felt this way because if too many people knew, they would start to crowd me. They would come around me and ask me lots of questions that I didn’t want to answer. They would also try to make me feel better which would sometimes get on my nerves because I wanted to deal with this just between my family, teacher and principal. I didn’t know how to explain it but I just wanted to be alone and not have to answer a bunch of questions about how I was feeling. A few days later, I continued to keep thinking about the deployment. When Dad was putting me to bed I got real close to him and I whispered that I felt like I was going to die. Dad asked me why I would say something like that and I told him that it was because of Mom’s deployment. He said that it was going to be OK and that I should not worry about it too much. I asked Dad if Qatar was going to war with the United States of America. Dad told me that Qatar is a very friendly country. Mom is going to the base there to support the war efforts. I asked him why Mom had to do this and he said it was something that she had to do for the Air Force and for our country. I continued to feel sad, mad and very frustrated because I kind of felt it was unfair that my Mom had to go on this deployment and other people’s Mom’s didn’t have to do it. This book will take you on a journey of emotions, frustrations and struggles as Jayden gets through the deployment. He will share how he went through experiences without having his Mom to share them with, like his first double digit birthday, travels to Florida with just Dad, graduating from fourth grade and all the ups and downs of his sports. Jayden also gets an opportunity to travel to the other side of the world to see his Mom. In the end Jayden realized that he could get through tough times and that true strength comes from family.

In April of 2017, Jayden M. Semotan’s life changed greatly. After learning his mom was being deployed for more than six months, he had so many questions. Would she die? Would she go to war? As a nine-year-old boy, he didn’t know how to handle his feelings. Having his mom deployed was very different than having his dad go. A Green Light for Mom chronicles his journey of emotions, frustrations, and struggles as he survives the challenges of a parent’s deployment. Jayden tells how he experienced significant life events without having his mom to share them with, like his first double-digit birthday, travels to Florida with only his dad, graduating from fourth grade, and all the ups and downs of his sports involvement. Jayden also shares how he and his dad had an opportunity to travel to the other side of the world to see his mom. In the end, Jayden realizes he can overcome tough times. He learns that true strength comes from family.

Jayden M. Semotan was born in Menomonee Falls, Wisconsin, March 12, 2008. His mother, Tina, has been in the Air Force for more than twenty years. He plays football, baseball, swims, plays video games, and works out with a trainer to get stronger. He enjoys traveling to national monuments and vacationing in Florida with family.