To Trust in What We Cannot See 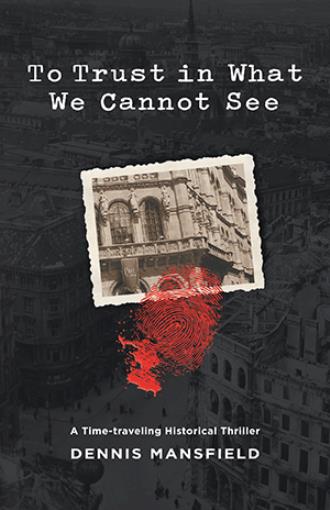 Our knock on his door was met with silence. Then, slowly the door opened and standing eerily before us, was a young version of Adolf Hitler. “Guten Tag; what may I do for you?” he said. Doc andI stood speechless. Not knowing what to say, I simply blurted out, “May we come in? We’d like to see your art.” He paused, looked us over, then nodded and opened the door. “I hope you have plenty of money with you,” the future killer of six million Jews said with an awkward and un-businesslike tone in his voice. As he closed the door, Adolf Hitler turned back to both of us and then peered strangely at my co-visitor. It forced my attention towards Doc, too. My partner in dimensional spacetime travel, Dr. Russell Gersema, held a Steyr Mannlicher M1912 semi-automatic handgun pointed directly at the forehead of the father of the future Nazi movement.

To Trust in What We Cannot See is the first book in Dennis Mansfield's series of time-traveling, historical thrillers. The story builds a genre-bending, thought provoking plot around a little known historical fact: During the month of January 1913, Adolf Hitler, Joseph Stalin, Vladimir Lenin, Leon Trotsky, and Josip Tito all lived in Vienna, Austria, near each other, and all regularly frequented the same coffee shop, Cafe Central. At the time, these five young men did not know one another-although some of them may have faced off in games of chess. This historical science fiction epic travels across space-time dimensions in an effort to prevent past horrors-in particular, the rise of the Nazi party and the Holocaust. Yet, a calculated act of murder to change the past winds up having an earth-shattering impact on the future.

Dennis Mansfield is the author of 8 books - non-fiction and fiction. He loves a great story, especially those born from history. Hence, he's a veracious reader and movie buff. While he's always enjoyed writing, he had no ambition to be an author. When his son Nate passed away in 2009, he began looking at life in a totally different way. It was the crucible of grief that ignited his passion to write about life and to chronicle the lessons he learned from his experience, in his first book, Beautiful Nate. Seven books later he's still writing and it's part of his DNA — an outlet for the stories that fill his mind. A Member of the West Point Class of 1978, where he served as Class President and a candidate for U.S. Congress, Dennis is an author, business coach and speaker at DennisMansfield.com