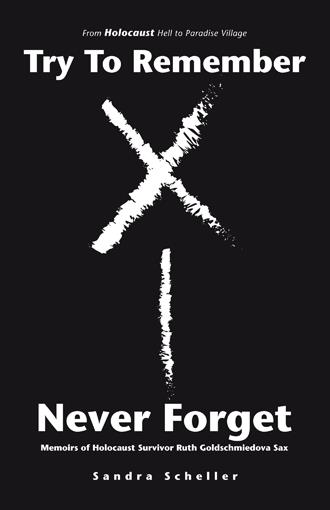 Meet Ruth Goldschmiedova Sax. She is standing next to the dress that my grandmother wore during the time she was in Oederan. She never took it off, and every week she would bend over and the Nazis would paint an X and stripe down her backside. The dress was initially given to her in Auschwitz. Ruth Goldschmiedova Sax’s life story begins in Moravia in 1928, where she lived comfortably as an only child with her parents. At the age of eleven, the Nazis invaded Czechoslovakia, and life changed for everyone. By 1941, the family found themselves getting off a transport train in Theresienstadt, where Ruth was forced to grow up quickly. She was shaved to prevent lice infestation, her feet were wrapped in paper to keep them warm in the winter, and she witnessed the deaths of many. Separated from her father, she survived awful circumstances, only to be sent to Auschwitz in 1944, where she faced Dr. Mengele half a dozen times. Finally, with G-d’s help and liberation, she was reunited in 1945 with her mother and father, a miracle within itself. Ruth later immigrated to America, where she married Kurt Sax, whom she had met at age seven. This memoir narrates the dramatic life circumstances that led her from her birthplace in central Czechoslovakia to three concentration camps and finally to her home in America. Future plans are to find a museum for this dress so that it can be displayed accordingly for all to see and to remind us to never forget.

Sandra Scheller’s artistic life includes creating, repairing, designing costumes and clothing for film, theater, and the famous Martha Becket’s Amargosa Opera House near Death Valley, CA. Her designing and sewing skills came from her mom along with flamenco costume designer Vera Ray in the United States. She assists Vilen Golovko of The Flying Cranes aerial ballet and trapeze for over 19 years, with acts in Cirque Du Soleil and Ringling Brothers Circus, China, Germany and Russia. Numerous CD music covers include Sandra’s photography including Los Romeros and Ninel Novikova. She worked 9 years at the Cirque De Soleil as a technician in wardrobe, coached and was head of the wardrobe for Cirque Du Monde, wrote and performed a solo show at the Amargoso Opera House entitled “If These Walls Could Talk” and was nominated as the Artist of the Year in the stage of Nevada 2010. She graduated from San Diego State University and received her teaching credentialing from UCLA. She won the Top Female Mime Award at the National Mime Festival n 1975 and 1976, performed numerous commercials as a mime, guest performed in Reading Rainbows and Sesame St. along with the dancing in Rayna’s Spanish Ballet. She is married, has raised 2 boys and now assists with the needs of her Mom, a job and responsibility that takes priority over everything. Sandra asked her mom is she was comfortable talking about her concentration camp experience, since it was not talked about as a child growing up in the Sax household. Her work in documenting her Mother’s life story is noting short of miraculous because she was able to understand first hand about Ruth’s childhood while teaching us to NEVER FORGET. The book has received the IUNIVERSE editor’s choice award, the Gayle Mc Candliss Literacy Award 2017, Multicultural Motion Pictures Association 2017-2018 author/documentary award, Readers Favorite Five star award, recognition from President Barack Obama and the CIA, Honorable Minister of Culture and Education Ms. Kadis in Cyprus, in Cyprus’ School curriculum in Nicosia as well as the United States Holocaust Memorial Museum, Washington DC. Please visit and like our Facebook page at Try To Remember Never Forget and website at www.trytorememberneverforget.com. There you will see updated videos and interviews.