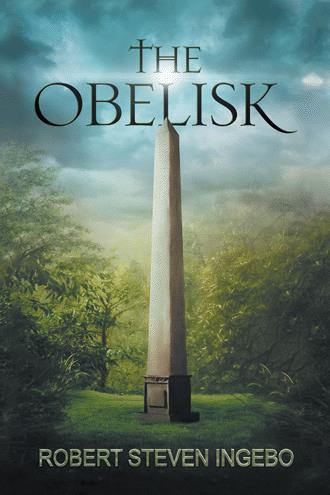 The Obelisk is a supernatural thriller that’s filled with intrigue, drama, romance, action and adventure.

Angela’s friend and fellow professor, Tom Harrison, who she brought along on their first date, exhibited certain eccentricities, leading David to the conclusion that he, as well as Angela were harboring secrets, and he was determined to find out what they were.

As David continued dating Angela, he learned one of her secrets, that she was heiress to the fortune of a wealthy real-estate developer. David noticed, during several outings at Angela’s parent’s mansion, that Tom Harrison’s behavior continued to deteriorate, culminating in a psychotic episode at a 4th of July celebration at a European Aristocrat’s mansion.

When David visited him in his hospital room the next day, Thomas asked him to retrieve a cedar chest, located at his parent’s cabin in West Virginia. Out of sympathy, David agreed. Unfortunately, when he returned, Thomas was dead, having passed away under mysterious circumstances, leaving David in possession of the chest, which contained two books written in a strange language.

After the books were translated, David learned that one of them was the memoirs of the now deceased Thomas Harrison. The information he gleaned from Tom’s memoirs changed his life forever. David knew that he had to make the most important choice that anyone could ever possibly have to make.

He could either dismiss the writings as the hysterical ravings of a madman, or he could try to discover if the information contained in them was true, because if it was true, it would be the most important find in the history of mankind.

Robert Steven Ingebo is a published author. He has published many articles in two major US new outlets: The Patriot Post and The American Thinker. He has also published numerous articles in the Canada Free Press, a major Canadian news outlet. He has written two novels and is currently writing a third one.