My Ordination to the Ordinary

by Melinda Worth Popham 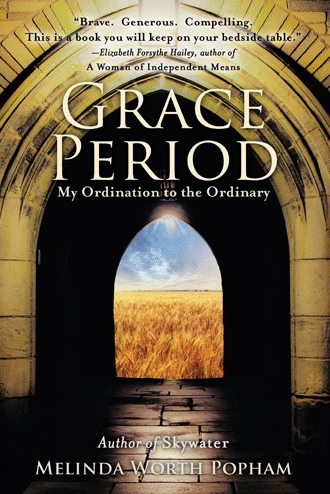 Author Melinda Worth Popham left home for Yale Divinity School at age fifty-six after a barrage of painful life events brought her to her knees and led to the discovery that pain is the Miracle Gro of spiritual growth.

Grace Period recounts the spiritual journey launched by the break-up of her marriage and her teenage daughter’s descent into an intractable depression that led to an Ivy League seminary, not in pursuit of ordination to ministry but quite simply to her “plain old ordinary sacred self.” Wise, honest, and unexpectedly humorous, Grace Period is not only about Popham’s study of God but about God’s education of her.

“In this impeccably written memoir, Popham ... proves herself a highbrow, refined spiritual sister to Anne Lamott.

“Anyone who has suffered, or lives with a modicum of spiritual curiosity, will want to press this book into the hands of a friend.”

“A stunning spiritual autobiography and a work of profound discernment.”

Melinda Worth Popham earned a BA from the University of Chicago and MAs from Yale Divinity School and Stanford. Her previous book, Skywater, was named an American Library Association Notable Book. She has two adult children and lives in Los Angeles. This is Popham’s third book. Visit her online at: www.melindaworthpopham.com