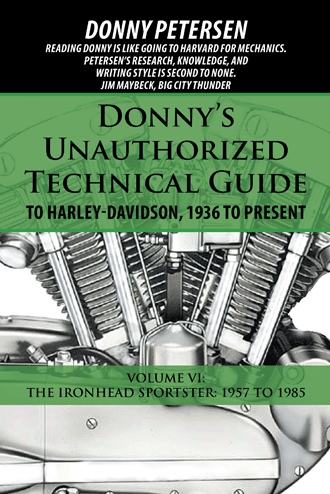 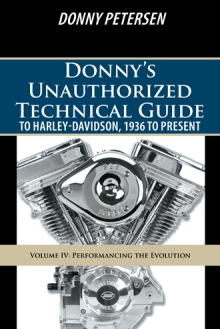 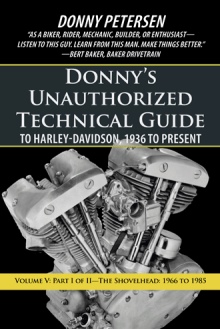 Donny Petersen feels honored to share the wealth of his motorcycle knowledge and technical expertise.

He offers the real deal in understanding the Harley-Davidson. He gives workable solutions for whatever ails the 1957 to 1985 H-D (Ironhead) Sportster. Graphics, pictures, and charts guide the reader on a sure-footed journey to a thorough understanding.

Donny intersperses the technical explanations with entertaining true stories of the hard core lifestyle of these years including The Wild One, Easyriders, the Birth of Hog, Willie G., Steppenwolf, Evil Knevil, the reviled AMF, 1%ers, and who could forget Elvis Presley.

Petersen’s insight makes technical issues understandable even for the novice.

This is the eighth volume of twelve of Donny’s technical series. Petersen is the dean of motorcycle technology. Donny examines the theory, design, and mechanical aspects of the Ironhead Sportster.

Donny has ridden hundreds of Harley’s across four continents doing all of his own roadside repairs. He has acquired his practical knowledge the hard way.

Donny Petersen has the privilege of sharing his technical secrets with easy understanding. He will walk you through detailed mechanical procedures concerning the power train, electrical, fuel delivery, ignition, and the gear head favorite subject of oil and lubrication.