This Is the Rat Speaking

Black Power and the Promise of Racial Consciousness at Franklin and Marshall College in the Age of the Takeover, 1967–69 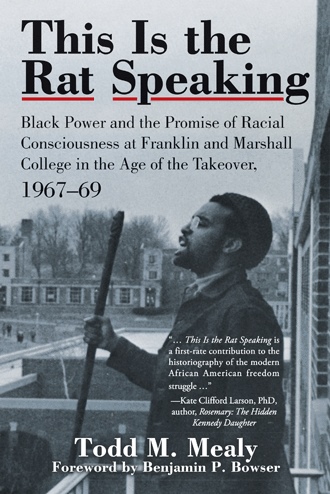 Many of the students were boxed in because of those circumstances. Arguably, since 1969 was the year of campus unrest, building seizures at other colleges and universities had some, if not great, influence on Franklin and Marshall’s May 22nd Uprising. From January up to the day of the boycott in May of that year, Minnesota, Louisville, Stanford, Brandeis, Swarthmore, Cornell, Rutgers-Newark, Duke, San Francisco State, Pittsburgh, Tennessee, and Fisk Universities experienced their own cases of black students taking over administration halls and common areas while demanding black studies programs. Lew Myers testified to an investigation committee: “I think it was a cause for unity . . . here’s a chance to do something before the year’s over.” It seemed like a good explanation for trying to rationalize why the boycott spiraled out of control. “When you’re a college student and go home for vacation one of the things I’m sure that is talked about is, ‘we sat in on so and so, who’d you sit in on.’ When you say you didn’t sit in on somebody that’s the same as when you’re on the corner you’re talking about this or that, one-better-type-story kind of thing.” Presumably not every student of color at Franklin and Marshall was involved in the uprising, but the black student community was in a vacuum. LeRoy Pernell acknowledged, “With the exception of half a dozen folks or so, every black student [on campus] was aware and surely supportive of the issues or position that we were taking.” And by 10:00 a.m., James Gordon was being introduced to Franklin and Marshall’s version of 1969 unrest.

Author of Aliened American: A Biography of William Howard Day, 1825–1900; Legendary Locals of Harrisburg; and Biography of an Antislavery City: Antislavery Advocates, Abolitionists, and Underground Railroad Activists The demise of the so-called Jim Crow laws in 1964 and 1965 and the victory of the civil rights movement rang hollow in the ears of most African Americans. While segregation was practiced in many places of the South, systemic forms of racism permeated northern society. As distrust pervaded African American communities after 1966, the maligned Black Panther Party filled the void, especially among baby boomers who moved the African American liberation movement further to the left. During this difficult time, when the country was torn apart by issues of race and poverty, as well as the escalation of the Vietnam War, unrest seemed to prevail at a myriad of colleges and universities across the United States where newly formed Afro-American societies and black student unions pressed for pedagogical change suited to the liberation doctrine coming from the black left. Spring 1969 was a particularly explosive semester as African American students occupied administrative buildings and common areas at both historically black and predominantly white colleges on the East Coast. In This Is the Rat Speaking, author Todd M. Mealy reconstructs the May 22, 1969, black student uprising at Franklin and Marshall College. Using Lancaster County, Pennsylvania, and Franklin and Marshall College as his setting, Mealy revisits the role and influence of the Black Panthers and delves into how activism for black studies curriculum emerged within the black power movement of the 1960s. Based on oral history testimony, investigation reports, and judicial records, Mealy provokes discussion from different perspectives.

Todd M. Mealy holds a master’s degree in American studies and is currently a doctoral candidate at Penn State University–Harrisburg. He is an educator in the Penn Manor School District. Mealy and his wife, Melissa, have one son and live in Lancaster, Pennsylvania. This is his fourth book.