Tales from the Other Side

Growing Up Jewish in Nazi Germany 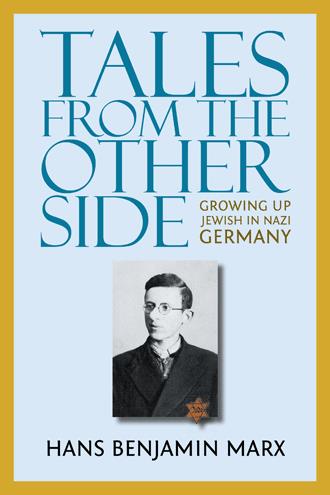 On June 6, 1946, I stood on deck of the United States Ship “Marine Flasher” watching the shores of Germany, shrouded in morning fog, slowly sink below the horizon. A phase of my life was behind me, I thought best to be forgotten. Yet memories of growing up in Nazi Germany, imprisoned in the mind’s hidden crevices, kept asserting their presence. The impetus to release them came from my children. They wanted to know what happened, and they had a right to know. Encouraged by my wife I wrote a few stories. Story triggered story, memories awakened memories; soon pages were filled with remembrances. Millions of stories from the destruction of Jewish life in Europe have yet to be told – sadly many never will. My stories tell of the life of a Jewish family in Germany as seen through the eyes of a Jewish boy in his most formative years. Hopefully, the stories will fill a small portion of this enormous gap. Three events, occurring nearly at the same time, mark the beginning of my journey from childhood to adulthood: My parents’ recovery from their financial difficulties caused by the economic collapse of the late nineteen-twenties, the coming to power of Hitler, and my entering first grade. It was a twelve and a-half year journey through an ever-worsening nightmare, a nightmare that ended only with Germany’s total defeat. TALES FROM THE OTHER SIDE is told in five parts, spanning the time from early 1933, when I turned six and Hitler came to power, to mid-1945, two months after Germany’s final surrender. An INTRODUCTION provides my parents’ background; a brief EPILOGUE describes my experiences in American occupied Germany while waiting to depart for the United States. In June 1946 I arrived in New York City to start a new life.

Stories of Jerusalem, Israel and Other Loves
Norma Marx
$12.95

This book is about a unique story of survival and preserving love. There are millions of stories from the destruction of Jewish life in Europe to be told—sadly, many never will. This story, as seen through the eyes of a boy, is about a family that remained in Germany and lived Jewish lives even during the worst times of Nazi rule.

In 1927 Hans Benjamin Marx was born to Elise and Ernest Marx in Mannheim, Germany. A six-year old public school student when Hitler came to power, Hans became a keen observer of how the world was radically changing around him at a very early age. After Kristallnacht in 1938, his father was arrested and sent to Buchenwald Concentration Camp, while Hans, his sister Claire and his mother remained with the Jewish community in Frankfort where they had been living for several years. Hans continued going to school for as long as he was permitted, moving from public schools to Jewish schools. It is remarkable to note that Hans had his Bar Mitzvah at the Underlindau Schule, an Orthodox synagogue in Frankfort Germany in January 1940; a story that seems impossible. Throughout the horrendous persecution and the grueling day-to-day life of Jews living inside Nazi Germany, Hans’ teenage years were filled with menial work and remaining close to his mother and sister. He spent the war years, with Allied bombs dropping around him, working as a carpenter’s apprentice, gardener and street sweeper. It was in February of 1945 (after Auschwitz was liberated), that the Nazis sent the last deportations of Jews to concentration camps. Before leaving on the train to Theresienstadt, Hans promised his mother, “don’t worry, I will survive. I’m coming home.” He kept his promise against all odds, arriving at his mother’s apartment in June, 1945. A year later, Hans, his mother and his sister were on the Marine Flasher, the ship commissioned to take Displaced Persons to New York to start new lives. By 1955, Hans had completed his service in the US Army, received a degree from City College of New York in Mathematics and Philosophy, and married the love of his life, Norma. Hans had an exemplary 36-year career as an early computer scientist working on logic design, system engineering and program management with Burroughs Corporation (now UniSys). He received several patents for processors that laid the groundwork for current computing systems. Hans and Norma made a home outside Philadelphia, Pennsylvania, raising three children and being actively involved in their community. After retiring in 1994, they moved to Jerusalem, Israel. Fulfilling a lifelong Zionist dream, Hans and Norma enjoyed life in Jerusalem for 17 years, where he wrote this memoir. Now living with Norma in Atlanta, Georgia, Hans’ story was published in honor of his 90th birthday by his wife, children and four wonderful granddaughters (Elise, Adina, Talia and Jenna).