Miracle in the South Pacific

A Sailor’s Story of Survival in World War II 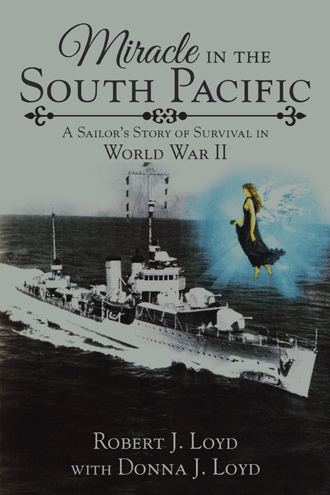 Ominous storm reports continued coming over weather radar to the operational officers. Captain Calhoun issued orders to inspect and to secure everything, getting the ship into heavy weather readiness. We made all ammunition cabinets water tight, set depth chargers in safe position, secured life rafts, and put the motor whaleboat in ready position to use for survivors if needed. While we made these preparations, the waves became more and more treacherous. The ship began rolling violently from side to side. It was then that Captain Calhoun commanded that all crew not on duty, go below to living quarters, prepare to weather the storm, and “batten down all hatches.” With a feeling of impending doom, I followed the engine crew below to our quarters. Standing without holding on to something was impossible. We dodged flying objects as they flew from side to side crashing into bulkheads! We slammed into one another and smashed into the surrounding steel walls and machinery! Our commanding officer screamed at us to lash ourselves to our bunks or stanchions to prevent injuries. At that time we had no real idea how critical the storm had become—or that it was a “typhoon-class” storm, but panic began to set in. Men were praying already and praying loudly. We had no way of climbing up to look at the sky, but we didn’t need to. We knew instinctively what was happening, and it was happening quickly with the violent rolling of the ship. In minutes salt water covered the floor of our compartment. The generator suddenly failed. We lashed ourselves down in whatever way we could manage and became captives of the storm, unable to move. The engineers on duty in the engine room had absolutely no control of the ship. In naval terms, the ship was going into “irons.” In plain language, the ship’s crew had lost control, and the weather had taken over. The steering had to be tackled manually from the aft steering quarters where water was also rising quickly. The steering crew took turns pumping water out of the steering quarters in order to attempt to steer the ship by hand. The deafening roar of the wind along with the intense, unrelenting rolling of the ship worsened minute by minute. Helpless, we hung on to our leather straps and belts in the dark recesses of our iron ship in a huge ocean in the middle of a raging typhoon. Bound to my bunk with leather straps, I shut my eyes tightly to block out the storm raging around me and to ward off the panic I was feeling. I saw my mother in my mind’s eye. “Mom,” I called out to her. “Mom, help me!” No one could hear me call out. I hoped she could hear me.

In 1943, Robert Loyd was a sixteen-year-old without a driver’s license or a car who had just moved to St. Louis from the countryside. The Uncle Sam Wants You! posters hanging in every public building enticed him to lie about his age and join the fight. After graduating from the program at Farragut Naval Training Station, he was assigned to overhauling the USS Dewey, a destroyer, in Bremerton, Washington. When the Dewey was deemed seaworthy, his group received orders to join the Third Fleet in the Pacific and arrived in Honolulu in October 1943. The next months were spent in and around Ulithi atoll in the Western Caroline Islands, protecting and escorting the fleet’s carriers, tankers, and cruisers. In December 1944, the Dewey weathered a powerful typhoon, her crew lashed to their bunks or to stanchions, as the ship was tossed by winds and rain and finally righted itself after an eighty-degree roll. After repairs, the ship rejoined the fleet in February 1945 and supported the invasion of Iwo Jima. The Dewey was decommissioned in October 1945, and the author returned to civilian life in May 1946.

Robert J. Loyd is a first-time author at eighty-eight. His naval experiences are archived at the Admiral Nimitz Museum, Fredericksburg, Texas. In 2013 he participated with WWII veterans in an Honor Flight to Washington, DC. After eighty-seven years in St. Louis and his wife’s death, Mr. Loyd moved to a retirement community in Savannah, Georgia, near his son and daughter-in-law (his coauthor). Donna J. Loyd a retired high school teacher, taught English and directed a nationally-recognized writing program for teachers in Columbia, Missouri, As a writing consultant, she conducted workshops and seminars at state, national, and international conferences. After moving to Savannah, she taught creative writing at Savannah Christian Preparatory School and presently serves as associate director of the Coastal Savannah Writing Project.