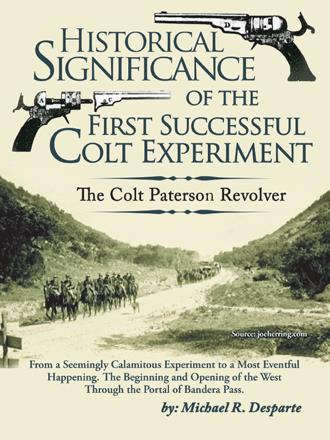 It would be hard to believe that the Rangers were not aware of the potential of an ambush, as they went through the Pass. It would be a perfect setup for such an action. The rangers had made it through approximately, a third of the pass when they were attacked. Shots, arrows, lances, and war hoops filled the air. Prepared, as they were for anything, the Rangers were startled. Men, and horses, both being hit by these flying missiles, caused instantaneous confusion among the Rangers. Some of them being shot from their saddles, while others trying to manage their frightened rearing and plunging horses. Captain Hayes, while maintaining his composure, commanded his troops to, “steady themselves, we can whip them, no doubt about it. Dismount, tie up the horses and find cover, were gonna fight em on foot.

This research paper describes how the subject, Colt Paterson Revolver, was found. The description in the ad provided by the Dakota Plains Auction Co. didn’t match the illustrations shown in the advertisement of the gun. It was either an oddity or something special. It is not this author’s nature to whimsically purchase something so expensive without doing additional research as to its true value, and my curiosity. Sam Colt, as a young man, had interests in explosives and guns, what sixteen year old isn’t fascinated with them? In those days, the early 1800’s, the common gun was a single shot musket. My curiosity turned into a study of how the invention proceeded through its developmental stages. Colt was the first one to invent a repeating revolver capable of expending five shots without reloading between each shot. It further discusses the trials and tribulations leading to the development of that first handmade (experimental) revolver which actually led to the development of four production models. Of the four models, the .36 caliber became the pinnacle of the series, the No. 5 Colt Paterson Revolver, otherwise known as the Holster or Texas Model. It describes, for the first time, the thinking involved as experimentation progressed from the first hand made revolver to the production models. Issues such as the strength of the frame, the metallic quality of the cylinder, the explosive pressures in the cylinder and the bore were key considerations to its success. The research goes into the detailed step by step operation of each part of this gun during the firing cycle, and the genius incorporated into its moving parts; and briefly describes the effect of this revolver in its service in the western expansion of this nation in the mid to later 1800’s. It is known for its value to settlers, the Texas Rangers and U.S. Cavalry, in battles with bandits, Indians, and the Mexican Army. One major aspect of Colt’s line of revolvers in this era was keeping the Plains Indians at bay while the construction of the Transcontinental Railroad progressed. This railroad enabled the development of new cities, creating the demand for new and expanding markets in manufacturing, igniting the growth of eastern economies and fostering multifarious growth in the west. The .36 Caliber Holster or Texas Paterson Pistol was the spark that ignited this western economic growth of our Nation.

Michael Desparte is a Retired Associate Professor from the University of Wisconsin. He has a Bachelor of Science Degree in the College of Letters and Science and a Master of Arts Degree from the University of Minnesota. He has had particular interest in the history of firearms. Since his high school days. Encouraged by his father, he had the opportunity to restore an 1874 Colt Lightning. When acquired, there were several missing internal parts, with a flopping hammer, loose trigger, and a freely rolling cylinder. Using the resources of a nearby public Library he was able to locate sufficient information on this particular hand gun to fabricate the missing parts and eventually brought the revolver back to on operating condition. Over the years he has had an extensive collection of black powder as well as later models of handguns, rifles, and shotguns. That collection no longer exists. Now his principle interest is proving the authenticity of what is believed to be a Colt Paterson experimental revolver.