Under Color of Law

by A. Dwight Pettit 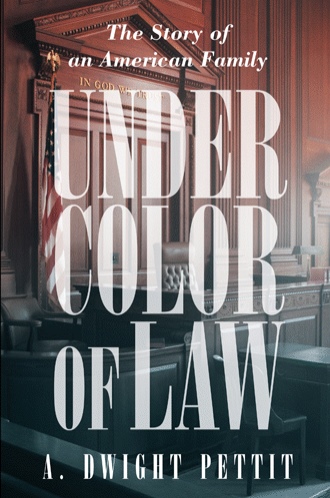 Building on the backdrop of his involvement in three important civil-rights cases, author A. Dwight Pettit narrates his personal story from the 1940s to the present in Under Color of Law. A successful civil-rights, constitutional, and criminal lawyer, Pettit focuses on the meaning of these cases for himself, his family, and the nation.

As a direct legal descendent and beneficiary of Brown v. Board of Education, Pettit shares its relevance to his education and to his career as a civil-rights lawyer. His memoir details a host of milestones, including an early childhood in the black community and a sudden transition into a tense, all-white world at Aberdeen High School where he was admitted by order of the U.S. District Court. He recalls his time at Howard University as well as the major litigation and representation in which he was involved as a lawyer, focusing in particular on his father’s case which involved the treatment, torment and retaliation his father experienced at his job for bringing his son’s desegregation lawsuit to trial. Attorney Pettit’s memoir also traces his involvement in politics, especially his intimate role in the Jimmy Carter 1976 presidential campaign and the Carter administration.

Providing insight into past and current civil-rights issues, Under Color of Law underscores the Pettit family’s pursuit of justice in the context of the drive for equal rights for all. “One of the most emotional, fascinating books I have read. … From start to finish, this book will have you question law as we know it and ask, in terms of racism and prejudice in America, ‘Has anything really changed?’” —“Zinah” Mary Brown, CEO, Elocution Productions

A. Dwight Pettit earned his law degree from Howard University Law School in 1970 and has handled many high-profile criminal and personal injury cases, including a case for his father that received national attention. Pettit practices law in Baltimore, Maryland, where he lives with his wife, Barbara.