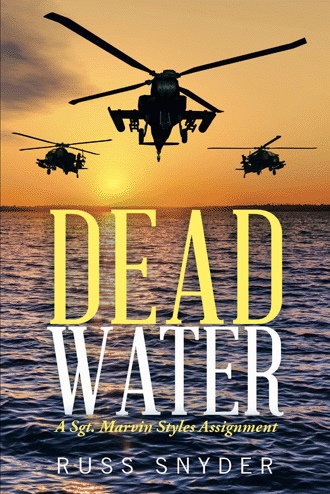 ‘Dead Water’ introduces us to one of the world’s most dangerous synthetic toxins. A horrific fish kill discovered in Alaska is quickly deduced to be the experiment of a new terrorist weapon. President Robert Williams, with the FBI, CIA, and the NSA already investigating, asks his friend, Capt. Richard Starr, retired, for his ‘group’ to also look into it; “Another set of eyes.” Racing against the other agencies, and time, Styles and company find themselves involved in a new aspect of their presidential directed mission, this one involving reasoning, investigation, and deduction; not just finding, and killing, known terrorists. With Darlene Phillips caught up in a ‘Cyber War’ with the CIA’s Myra Banks, Head of their Cyber Unit; the CIA is operating illegally inside the borders of America, with the FBI heavily involved in the mix; everything goes south when a catastrophic event leaves the country shaken to it’s very core, along with ‘The Group’, who begin to seriously question their ability to continue with the task as assigned. ‘Dead Water’ expands on the successful debut of President Williams’ quartet, as introduced in ‘The President’s Weapon’. A story you will not want to put down!

“… A definite page turner that grabs you and doesn’t let loose through the entire adventure! An awesome follow-up to The President’s Weapon …”

After parachuting into a clearing, Rijah Ellhad makes his way through the Alaskan woods until reaching a remote lake, dons hazmat gear, and tosses a vial into the water. Fourteen hours later, he returns and stares in disbelief at the scene before him; dead fish floating on the lake so thick that he thought he could walk across them to the other shore, causing a chill like no other to run up his spine.

After President Robert Williams learns of the horrific fish kill, he strongly suspects it is an experiment of a new bioterrorist weapon. After directing the FBI, CIA, and the NSA to begin investigating, he also asks old friend and former Marine Captain Richard Starr for him and his team, headed by Sgt. Marvin Styles, USMC retired, to assist in the operation. As Styles and team race against other agencies, and most importantly, time; they must utilize their unique skills to find the terrorists and eliminate the threat. Complicating the entire matter is a catastrophic event so shattering it shakes the entire country to its very core, and leaving the team questioning whether they can even continue.

In an emotionally gripping tale, this special civilian ‘Black Ops’ group must outrace and outthink everyone to prevent the unleashing of perhaps the most dangerous toxic terrorist weapon ever.

Russ Snyder is the author of the hugely successful novel, The President’s Weapon. He currently resides in middle Tennessee where he is active in his community and volunteers for charitable events.