You Are Cordially Invited to War 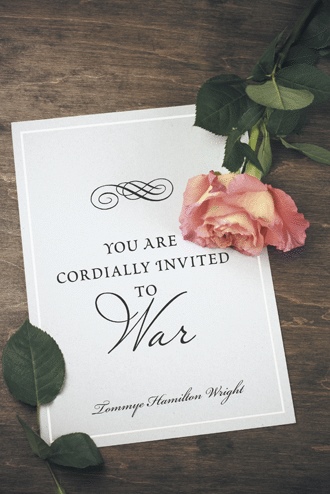 Billy and Dan imagined their father an all-important protector of the homeland, and rightly so. The boys could not go to sleep until the resident air raid warden returned with an “all clear” report. They never suspected Grant’s sense of inadequacy in filling this wartime service in the safety of his own street and in sight of his own home, his only weapon being a government-issued flashlight.

“No light, Kay Ann, absolutely no light, should be seen from American cities at night when air- raid alerts are sounded. It’s been ordered by the federal government and that includes our house.” Grant insistently admonished me since I insistently balked at the demand to cover every inch of the many windows of our home.

“This is getting serious. Ships have been sunk in New York Harbor, and German submarines have been detected off the coasts of the United States in the Atlantic and the Gulf of Mexico. In fact, Kay Ann, their location has been discovered quite close to the beaches of Florida where we like to vacation. There is absolutely no doubt in the minds of our government leaders that the borders of our country, including the Pacific coast, are under surveillance for possible attack.”

Mmm. Grant reads and listens to too much war news; I dismissed the threat. However, the gravity of our situation soon became real to me when I read even the lights on Broadway and in Times Square were completely extinguished until the war was over. That gave me a pretty good clue the danger was authentic, and our house was not going to be exempted. Indeed, the Franklins could not have the single “give away” light in the whole United States of America, drawing bomb-loaded enemy planes over Lynton. Furthermore, it would not look good for the air raid warden who lived at our house to cite his own wife for failure to comply with blackout orders, although the possibility of a restful night in jail sounded slightly appealing to me right about then.

As much as I’d rather have taken a beating, the proverbial bull had to be seized by the horns and wrestled down. The deception that the lovely heavy draperies in Mother’s house, with a little help, would do the job just fine was not acceptable. No, I had to sew well-fitted blackout curtains for all the windows in every room on every floor. The windows of our Victorian home were of many different sizes: different widths, heights and shapes (even an octagonal one!) Once Say and I completed measuring them, sewing the two zillion yards of tightly woven black fabric was my job. Thereafter I had to devise a way to hang the weighty things. Like I didn't have anything else to do.

“You can’t put it off another single day, old girl.” No surprise I’d taken up talking to myself. Secluded, I hoped, in my bedroom with Mother’s sewing machine and acres of the dark material, I easily imagined the Black Hole of Calcutta. I measured and cut and pinned and sewed. And sighed. Then measured and cut and pinned and rethreaded the bobbin and broke a needle and thought an ugly word. And sighed. Who’s going to care if this was the work of an accomplished seamstress anyway? Only the likes of Mrs. Wetherford would have her blackout curtains backed with velvet or silk toward the room.

At some point, I moaned dramatically massaging the cramp in my scissor-wielding hand. Mid-afternoon, Say stuck her head in the door and, judging the electrically charged atmosphere, entered carefully, tentatively humming.

“The mailman handed me these letters while I was sweeping off the front steps.” Say extended a small stack of bills and a letter addressed to Mrs. Matilda Carroll in an unfamiliar handwriting.  Curiously I opened the small envelope since Mother had asked me to handle all her correspondence.

I want to thank you for letting me live in your nice garage apartment without raising the rent when others were going up on rent for military folks. I told you the first of the summer the Army thinks my husband is a prisoner of war, but his name has not been on any lists. I haven’t heard anything for months so I don’t know if I am a widow or my baby has a daddy. I stayed here after our little boy was born to be close to Camp Timmens because I believed I could hear more from them. Now I don’t think so. It’s hard to lose hope, but I have to start thinking about our lives if Jimmy isn’t coming back. I’m going to move near my sister because there’s more work where she lives. There’s a factory making parachutes, and she’s sure there are jobs at the bomber plant not far from her town. I guess I could soon be Rosie the Riveter. Ha. Ha. Am enclosing rent for this month, but hope to get moved before cold weather sets in. I wanted to let you know so you could get another renter lined up. I’m sure any Army wife would like to live in this nice neighborhood. I know you've got trouble too and I’m sorry I couldn't help. I hope you are doing better and that your grandson gets well.

We had almost never seen this young woman and her baby who lived over the garage in our back yard. The polio quarantine was the dividing line that kept us from getting acquainted with her. Mother felt terrible about it, never imagining when she rented to Frances what was in store for our family. In the constantly changing military population, I doubted she had much support for the very hard time she was going through. It was a relief to hear she planned to move near her sister.

Brought abruptly aware of life beyond my curtain struggles, I gazed at the garage through the window above the sewing machine. How many tears had been shed within the tiny apartment walls? How many of that frightened young woman’s nights were spent sleepless, and lonely, and growing convinced of the worst? Who in the world in their right mind would consider making blackout curtains a big deal? I began to hum “The Boogie Woogie Bugle Boy.” Say rolled her eyes and shook her head as she left me to my chore and the environment of my own making.

When Say left for the day, I handed her an envelope to be delivered to Frances’ mailbox. I returned the month’s rent money with a note wishing Frances and her son well in their new location and asking her to consider the money our going-away gift to them. That was the very least we could do to ease the weight of their uncertain future.

It’s 1942 and the United States is deep into World War II. At home, amid adjustments to the hardships and heartaches of war, Kay Ann Franklin is losing a lonely battle caring for her terminally ill mother and her five-year-old twins, one stricken with polio and the other with chicken pox. Worried and exhausted, she has little left to give her baby daughter and her war-absorbed husband. When a colored girl appears at her back door offering to help, Kay Ann welcomes her but holds slight hope that the tiny, crippled Say can make a difference in their situation. To her surprise, the teenager brings reinforcements for the battle and lightness to their burdens. The family also discovers Say’s exceptional musical talent and begins to envision more than the girl can grasp. Kay Ann’s dream of a college education for Say is sidetracked by a brutal attack and malicious opposition from neighbors, friends, and Say’s preacher. In this historical tale, Kay Ann and an unlikely group of lady warriors embark on an unforgettable journey during the chaos of a world war endeavoring to help an underprivileged teenager achieve more than she ever imagined, and, most importantly, to believe in herself. “Wright does an excellent job of re-creating the feel of the homefront during WWII… It’s an important, engaging story that’s been neglected by other authors.” – Kirkus “Tommye Hamilton Wright offers a wise insider’s look into small-town life during World War II… This well-structured story offers interesting plot threads and well-drawn characters that maintain tension from the first chapter to the last. You Are Cordially Invited to War will interest those who enjoy good fiction set during a pivotal time in American history.” – Clarion

Tommye Hamilton Wright was born in Alabama and graduated from Brenau College with a degree in speech and dramatics. She has spent most of her adult life in north Georgia where she and her physician husband enjoy lakeside living with their family.