The Last True Merlin of Britain 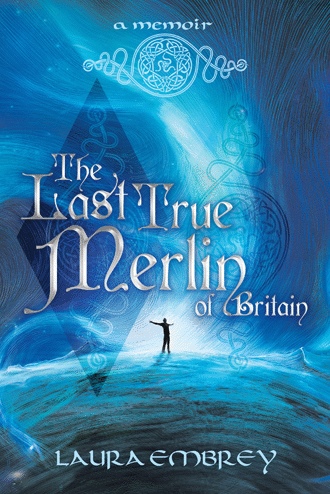 Her name was Brigit. She was the most beautiful woman I had ever met. Beautiful does not even begin to convey what I saw when I first beheld her person. Neither does grace, holiness, or pure joy, but taken together, these words at least make a beginning. In her presence, as Rhun introduced me to the temporary resident of the chapel, I became as one struck dumb. My inner eye opened of its own accord, and I saw this woman as a goddess, all aglow with silver and gold about her, as well as all the colors of the rainbow and some other colors I have only seen in other worlds. These soul colors overwhelmed her physical features in my sight, and I could no longer discern the contours of her face, which, before my soul vision blinded me, I had seen were perfect. Rhun must have noted my condition, for he laid a firm hand upon my right arm and guided me into the chapel, following my goddess. “Breathe,” he whispered into my ear. Obediently, I followed his advice.

“Ynis Witrin has been holy from the time of the ancient ones, the ancient lords of the lost land that the famous Greek philosopher called Atlantis. They were the builders of the star temple and the originators of the wisdom teachings that your druidkind study to this day.” This I knew, but I kept silent. “They moved the earth, stones, and water courses using a power and magic of which the likes of us, even you, a druid, have no inkling. Using this magic, they drew a map of the heavens upon the earth, a map of the path of the sun, for theirs had been a sun kingdom ruled by the sun wisdom until the dark claw of the Fallen One held the souls of the kings in thrall.”

Aurelion Emrys is a boy who has felt a deep sense of responsibility and purpose from the time he can remember. Although he grows up beside his best friend, Rose, he lives mostly apart from other children as an observer. Aurelion, who spends his days listening to the earth speak her mysteries, can also see straight into the souls of others. Simply put, the boy is special.

After nine winters, Aurelion reluctantly accepts his destiny as the next Merlin and prepares to leave his childhood, mother, and beloved Rose behind. Led by his own visions and his father’s wisdom, Aurelion embarks on a hero’s journey to Eriu the Magical Isle where he is initiated, becomes immersed in relationships with Arthur and his family, and greets his destiny from another life. But when Aurelion, now considered the wisest man in the world, suffers a betrayal at the hands of his pupil, he suddenly leaves the court. Has he truly disappeared or is he fulfilling another destiny that legend simply failed to record?

The Last True Merlin of Britain reveals the fascinating story of a hero’s voyage through real and spiritual landscapes as he attempts to satisfy his role in the Arthurian legends.

Laura Embrey earned a bachelor’s and a master’s degree from the University of California at Berkeley. She is currently a high school English teacher and the author of Form Drawing: Grades One through Four. Laura has one son and lives with her two cats in Fair Oaks, California.