How I Lost My Uterus and Found My Voice

A Memoir of Love, Hope, and Empowerment 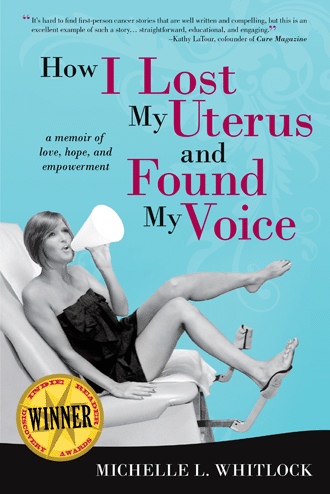 At age twenty-six, author Michelle L. Whitlock thought she had it all: her health, a promising career, and a budding new romance. Then she learned that she had HPV, and weeks later her worst nightmare became her reality: she was diagnosed with invasive cervical cancer. Adamant to preserve her fertility, she refused a radical hysterectomy and chose a less extreme, fertility-saving procedure. The surgery was a success, but just years later-a week after the love of her life proposed-Michelle discovered her cancer was back.

In this memoir, Michelle narrates her journey through and beyond cancer. She took charge of her health care by carefully choosing doctors and her treatment options. In just eight short weeks, she planned a destination wedding, harvested eggs, and with her fiancé, created embryos-their "maybe babies." She got married and ten days later underwent a radical hysterectomy, followed by chemotherapy and radiation. At twenty-nine, Michelle found herself with a new normal, which included menopause, hot flashes, a shortened vagina, and lack of sexual desire. She opens the door to her most intimate moments, frankly sharing how she worked to regain her sex life and providing other women in this situation a roadmap to do the same.

This is one woman's story of falling in love, battling HPV and cervical cancer, facing sexual dysfunction and infertility, and becoming her own best advocate. Inspirational, educational and honest, How I Lost My Uterus and Found My Voice tells the emotional story of love and loss, resilience and survival, empowerment and hope for the future.

So if you have a vagina or love someone with a vagina, this book is for you!

Michelle L. Whitlock earned a bachelor’s degree from Columbia Union College. She is a two-time cancer survivor, national speaker and advocate for women’s health and fertility options. Michelle lives in Arlington, Tennessee with her husband, Mark; their four children, thanks to the miracle of surrogacy and adoption; and their dog friends.