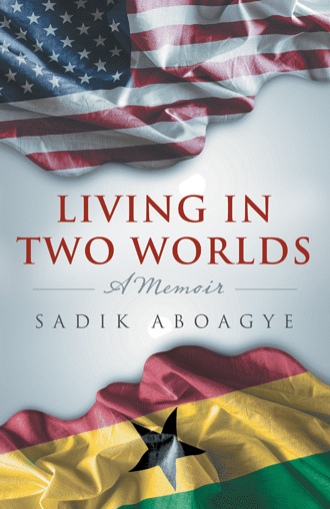 From a difficult, rural existence in Ghana to the promise of life in the United States, Living in Two Worlds shows how the necessities of life can be found in perseverance and faith. With inspiring and encouraging stories that chronicle his and his family’s journey, author Sadik Aboagye shares for posterity and for insight both the contrasts and comparisons of life on two sides of the globe.

“The author offers an impressionistic view of rural life in Ghana with its concomitant challenges. With some of us, it is a reminder of the good old days in the village where basic amenities like good schooling, electricity, pipe-borne water, and clinics were virtually nonexistent—and yet where life was normal and joyful. It equally serves as a useful resource for all those who never tasted rural life but grew up in the cities of Africa and other countries. Though the author went through myriads of problems and challenges with school, finances, fatal accidents, diseases, frustrations, and perilous times on the seas aboard a ship from Nigeria to Ghana—as well as many other heartbreaking events in his life—God protected him and his family in their journey through life.

It is also an encouraging story of how maximization and utilization of available natural and human resources can propel the individual and society to greater heights. I am deeply honored to write these few lines about this timely, needed, and informative book.”

Sadik Bosompem Aboagye Sr. is currently the executive secretary of the Ghana National Council of Metropolitan Chicago, the umbrella organization of the Ghanaian community in Chicago. He has served in various executive positions in the previous administration of the council, as well as the Asanteman Association of Chicago and Midwest. Presently, he is a chauffeur in Chicago. In his native country of Ghana, he taught in elementary school for six years, from 1973 to 1979, and then in high school for twelve years, from 1985 to 1997. While in Chicago, he worked with Alright Parking for six months. He later worked as a passenger service agent at Chicago’s O’Hare International Airport and also as a substitute teacher with Chicago Public Schools for six years from April 2000 to November 2006.

Born in Anyanso, a rural community in the Bosome-Freho District of the Ashanti Region of Ghana, Sadik Bosompem Aboagye attended the T.I Ahmadiyya Secondary School in Kumasi, Ghana. He graduated in 1970 and then studied at the Bagabaga Teacher Training College in Tamale in the northern region of Ghana. He received his professional teacher’s certificate in 1973. After teaching in the elementary schools for six years, he gained admission to the University of Ghana–Legon in 1979 for a diploma course in the Study of Religions and Philosophy.

After graduation in 1981, he performed his national service assignment at T.I. AMASS. With a sojourn in Nigeria, he returned to teach at T.I. AMASS in 1985, where he remained till 1997 when he went back to study at the University of Winneba for a degree course in Social Studies Education. At T.I. AMASS, he was the secretary of the school’s Parent-Teacher Association until he left the school for further studies in 1997. As a student in Winneba, he won the American Diversity Visa Lottery, which enabled him and his family to migrate to America.

Currently, he lives with his wife, children, and grandchildren in Chicago, Illinois, in the United States of America.